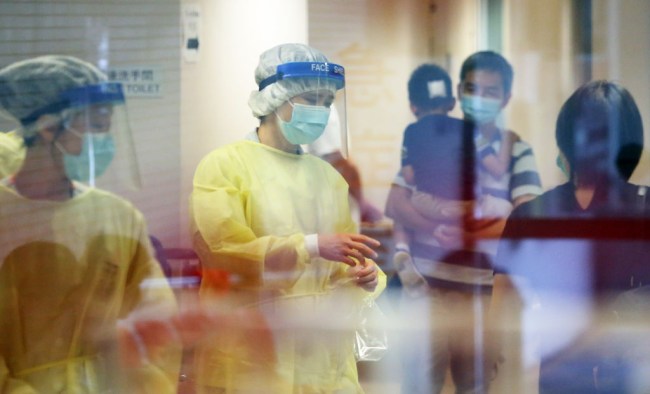 There are now more than 830 confirmed cases of coronavirus, and at least 26 people have died from the virus, according to the Washington Post. There are also 8,420 people who are “under observation” for the deadly illness.

Work continues at Huoshenshan Hospital, a specialized facility to treat coronavirus patients in #Wuhan. Building is expected to be done in six days pic.twitter.com/6Ys5yO8rPQ

A new scary development in the coronavirus news story is that previous victims who have died from the virus were over the age of 60 who had pre-existing conditions. However, one of the latest victims was a young, healthy man who died in Wuhan.

The coronavirus, which first spread from a wildlife market in Wuhan, has not been designated an “international health emergency” or a pandemic by the World Health Organization (WHO). Members of WHO held an emergency meeting in Geneva about the outbreak and determined that it was a “bit too early” to label it as such.

“Make no mistake, though, this is an emergency in China,” said WHO chief Tedros Adhanom Ghebreyesus. “It has not yet become a global health emergency. It may yet become one.”

RELATED: First Case Of Chinese Coronavirus In US Confirmed By CDC, New Evidence The Disease Is Transmitted From Human To Human

Heartbreaking videos from China are slowly leaking out of the country that shows the tragedy of the coronavirus outbreak. There are overcrowded hospitals, empty streets, sobbing health care workers, mobile “quarantine cages,” and people literally collapsing from being sick. Some of the videos are extremely troubling, so proceed with caution.

A weibo video posted by a person claiming to be a nurse in #Wuhan Red Cross Hospital. She said medical workers and patients were stuck with three deceased in a packed hospital corridor. No one is here to take care of the bodies. #WuhanPneumonia pic.twitter.com/MKumfLDPki

Video from a chat group shows the dire situation in Wuhan’s overcrowded hospitals. All concerned citizens, sick or not, have been waiting for confirmation on whether they’ve caught the #WuhanCoronavirus. Imagine how easily people can get sick from standing in these lines. pic.twitter.com/ZV7ahCc0AL

Allegedly medical staff of #Wuhan hospital mentally broke down and cried in despair:

More than 10 million Wuhan citizens were given up, sealed off, & not offered enough help.#WuhanCoronavirus #WuhanPneumonia pic.twitter.com/b4JXF32I94

My cousin in Shanghai sent me this video. Apparently this happened today: a traveller with high fever from Wuhan went straight into a quarantine cage.#WuhanCoronavirus pic.twitter.com/NtFoeHpRTn

There are too many people in the hospital to move! People keep falling!
Media in china is on lockdown #coronavirus pic.twitter.com/rWbYM4G4Rq

China is so concerned about the possibility of an epidemic that they are constructing a hospital solely for victims of the coronavirus. Government officials want the hospital built by February 3, and will reportedly demolish the building once the outbreak has ended.

Pop-up hospital under construction in Wuhan to handle #2019nCoV cases.

As with Xiaotangshan Hospital built in Beijing during the SARS epidemic, construction is expected to take around one week.https://t.co/AfnZYTyGjC pic.twitter.com/xjuDPdcSLd

#Breaking: Confirmed – A new hospital in #Wuhan in #China is being build right now, and will be finished within 6 days, to transfer all patients with the only symptoms of the #Coronavirus to begin cleaning all of the other hospitals.

The hospital will be demolished afterwards. pic.twitter.com/9k3NeMOVFn

There are reports of 50,000 military members being deployed to Wuhan and surrounding cities.

#Breaking: At least 50.000 military personnel have been deployed to #Wuhan and other surrounded cities, to secure the city and to prevent people to sneak out of the city borders and to provide safety and to preserve public order. #China #Coronavirus #Pneumonia pic.twitter.com/fJGnE5joKC

The Chinese government has put travel restrictions on some of the country’s largest cities in an effort to try to contain the spreading of the deadly outbreak. There are travel bans in place for 11 Chinese cities, including Wuhan, Ezhou, Huanggang, Chibi, Xiantoa, Zhijiang, Qianjjiang, Huangshi, Xianning, Yichang, and Suizhou. The cities have a combined population of 32.2 million people.

Pictures and videos of Wuhan city in lockdown are circulating on internet in China. People of Wuhan are making sacrifices. No matter how all this happened, I want to express my sympathy and salute to them. pic.twitter.com/8iQWj0RQvd

Restrictions in each city vary, but the government has locked down transportation such as trains, buses, subways, and even private vehicles in certain areas.

The ban has also prohibited food from arriving in some areas, which is ruining the Chinese New Year for many.

fruit and vegetable are getting out of stock in our local supermarkets here in #Wuhan nonetheless its Chinese new year#WuhanCoronavirus #wuhanvirus #Beijing #China #ChinaPneumonia pic.twitter.com/4VjWU79P6M

Saturday, January 25, is the Chinese New Year 2020, and many planned festivities will be canceled in the wake of the coronavirus outbreak. The first day of the Lunar New Year, also known in China as the Spring Festival, lasts for 15 days.

“In response to the prevention and control of the disease outbreak and in order to ensure the health and safety of our guests and Cast, Shanghai Disney Resort is temporarily closing Shanghai Disneyland, Disneytown including Walt Disney Grand Theatre and Wishing Star Park, starting January 25, 2020,” Disney operations in China said in a statement. “We will continue to carefully monitor the situation and be in close contact with the local government, and we will announce the reopening date upon confirmation.”

Chinese authorities have even closed portions of the Great Wall of China to try to stunt the spread of the coronavirus. The Juyonggang Great Wall Scenic Area, near the capital of Beijing, will be closed beginning on Saturday.

The Ming Tombs, the Forbidden City, and Yinshan Pagoda Forest will be shut down on Saturday. The Bird’s Nest stadium, one of the venues of the 2008 Olympic Games, was closed on Friday. McDonald’s has closed operations in five Chinese cities.

There have been confirmed cases of coronavirus in South Korea (2), Japan (2), Nepal (1), Thailand (5), Singapore (3), Vietnam (2), Taiwan (3), and the United States (3). The three confirmed cases in the U.S. are an airline passenger who flew from Wuhan to Washington state, a woman in Chicago who traveled to Wuhan in December, and one other person.

“The patient was admitted to a hospital, where infection control measures were taken to reduce the risk of transmission to other individuals,” the Centers for Disease Control and Prevention (CDC) said of the Chicago Wuhan flu victim. “The patient remains hospitalized in an isolation room in stable condition and is doing well.”

Senators John Barrasso of Wyoming and Josh Hawley of Missouri said the CDC will announce a third U.S. case of coronavirus on Friday afternoon, according to Bloomberg.

Over 2,000 travelers were screened for coronavirus at U.S. airports. At least 60 people are “under observation” in 22 U.S. states.

The US State Department ordered all non-emergency personnel and their families to leave the Hubei province in China, which is where Wuhan is located.

Coronaviruses are a group of viruses that cause diseases in mammals and birds, and upper respiratory infection in chickens. The coronavirus is an airborne respiratory illness that can be contracted within three-feet of someone who is infected.

RELATED: Mystery Illness Infected 200 People In China And May Have Spread To 4,500, US Airports Testing For Deadly Coronavirus