Mystery Illness Infected 200 People In China And May Have Spread To 4,500, US Airports Testing For Deadly Coronavirus 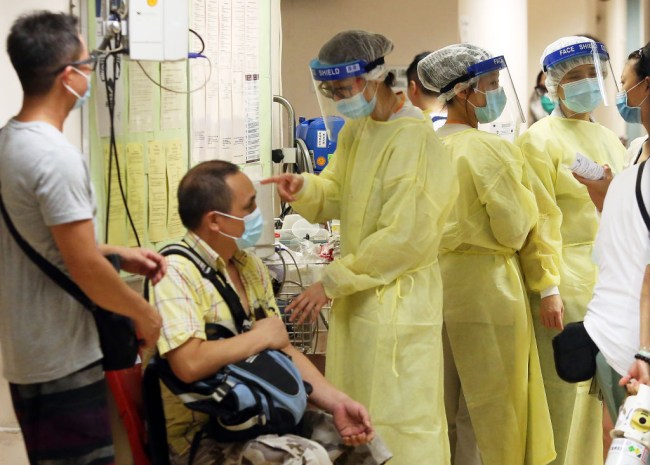 There has been an outbreak of a never-before-seen virus in China. Over 200 people have gotten sick from a mystery illness that has killed three people in recent weeks. There were 139 new cases of the illness in two days, according to Chinese authorities.

Chinese medical authorities believe the illness is 2019-nCoV, known as the coronavirus. The coronavirus is not the near-death feeling you get the morning after drinking too many Coronas and tequila shots at the Senor Frog’s in Cancun. Coronavirus, which is in the same family as Severe Acute Respiratory Syndrome (SARS) and Middle East Respiratory Syndrome (MERS) viruses. The SARS outbreak in 2003 infected over 8,000 people and killed 800 people. The MERS outbreak infected nearly 2,500 and resulted in more than 850 deaths.

Q: What is a #coronavirus?

The coronavirus is a respiratory illness that has pneumonia-like symptoms. Victims of the illness experience high body temperatures, dry cough, inflammation in the lungs, shortness of breath, or breathing difficulties.

The illness was first reported to the World Health Organization (WHO) on Dec. 31, 2019. The origin of the coronavirus is believed to be from the Huanan Seafood Wholesale Market in Wuhan, a Chinese city with a population of over 11 million. Over 800 residents attended the Wuhan market or had contact with people having symptoms of the coronavirus, and Chinese authorities are monitoring the potential for an epidemic. The coronavirus is found in all kinds of animals from livestock to household pets to bats.

The Wuhan seafood and wildlife market has been closed since January 1 to prevent the spread of the coronavirus. China’s National Health Commission said an “animal source seems the most likely source” of the virus, but there was “some limited human-to-human transmission occurring between close contacts.” They added that the virus was “still preventable and controllable.” They recommended avoiding “unprotected” contact with live animals, and to thoroughly cook meat and eggs.

Chinese authorities said 170 people in Wuhan were admitted to hospitals and being treated for the illness, including nine who were in critical condition. Some scientists speculate that as many as 4,500 Chinese citizens may already be infected with the coronavirus. Researchers at the Imperial College in London say we may be at the “tip of the iceberg.” Scientists estimate “there have been 1,700 cases of the coronavirus – which has never before seen in humans. But they added it could have passed 4,000.”

New cases of deadly mystery virus; global effort is underway to contain the coronavirus, which the CDC is monitoring closely. @sramosABC reports. pic.twitter.com/Xyi11NtOuA

Cases of the coronavirus have been found in Wuhan, Beijing, and Shenzhen in China. There were two cases in Thailand, one in Japan, and a woman was quarantined at an airport in South Korea, all of whom had traveled to Wuhan.

The fear of a global pandemic has caused U.S. health officials to take precautions at some of the country’s busiest airports. U.S. health and immigration officials will start screening passengers on direct flights from Wuhan for symptoms such as coughs and fever to JFK Airport, San Francisco International Airport, and LAX. Popular airports in Hong Kong, Singapore, South Korea, and Malaysia have also begun to test passengers from Wuhan.

passengers screened for coronavirus symptoms on a domestic flight out of Wuhan pic.twitter.com/ytUbVzpYRZ

“We are concerned any time there is a new virus or a new pathogen emerging in a population that hasn’t seen it before,” said Nancy Messonnier, director of the CDC’s National Center for Immunization and Respiratory Diseases. “Because what it means is that the population doesn’t have any existing immunity, and we don’t have any specific treatment or vaccines.”