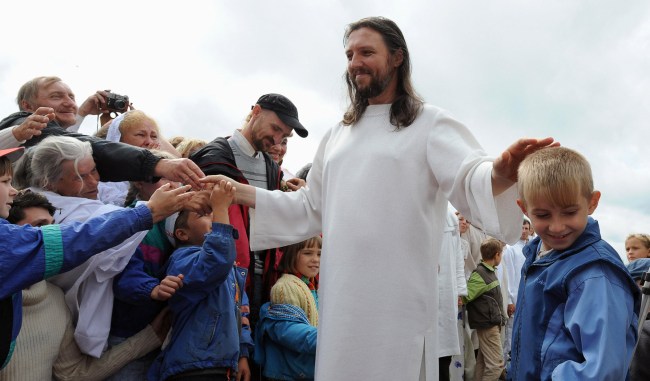 Ex-traffic cop and locksmith Sergei Torop turned cult leader slash messiah, known better to his followers as Vissarion Christ the Teacher, founded the Church of the Last Testament in 1991 after claiming he was reborn as Jesus Christ reincarnated, was arrested Tuesday on charges of running an illegal religious organization.

The Church of the Last Testament, located deep in Siberia’s Krasnoyarsk region for almost 30 years, is now under investigation as Torop and two of his aides allegedly extorted money from the cult’s followers and subjected them to physical and psychological harm. Shocking, but true.

Russian authorities arrested a former police officer who claims to be the #reincarnation of #Jesus and has run a cult based in the depths of Siberia for the past 30 yrs. Helicopters and armed officers stormed the communities run by Sergei Torop, known as Vissarion #NewsBurstLive pic.twitter.com/0BEj9FDeT1

Employees of the FSB and the Investigative Committee carried out a large-scale operation in the village of “City of the Sun” in the Kuraginsky District of the Krasnoyarsk Territory, where the religious organization “Church of the Last Testament” (also known as the community of Vissarion) is located, Taiga.info reports.

During the operational activities, the head of the community, Sergei Torop, who calls himself Vissarion, and two of his assistants, Vadim Redkin and Vladimir Vedernikov, were detained, a law enforcement source told TASS. They were taken away by helicopters in an unknown direction.

Torop, 59, who has six children from two marriages, divorced his first wife and married a nineteen-year-old who had lived with him since she was seven.

“I am not God. And it is a mistake to see Jesus as God. But I am the living word of God the father. Everything that God wants to say, he says through me,” Vissarion told the Guardian in 2002.

Major military-style operation in Siberia with dozens of armed men storming the Sun City, one of the communities of the cult leader Vissarion. Former traffic policeman Sergei Torop, known as Vissarion, his aide Vadim Redkin were reportedly detained & flown away under armed guard pic.twitter.com/QsuoxUIWd8

He has also written a ten volume “sequel to the Bible,” abolished Christmas and replaced it with the anniversary of his first sermon, claims Mary – the mother of Jesus – is his mother, and three years ago he informed the BBC, “We have a school of noble maidens here. We’re preparing girls to become future wives, future brides for worthy men. She has to understand not to rise above the man, not to be proud of her independence but to be shy, inconspicuous and weak.”

Sounds like a lovely man. No wonder he has thousands of loyal followers.

The Daily Mail reports Torop “lives in a comfortable chalet while his followers reside in wooden huts in one of Russia’s coldest regions with temperatures sinking to minus 50C (122F) in winter.”

And now he could reportedly face up to 12 years in jail if convicted on charges of using “psychological violence” to cause “serious harm” to his followers’ health. Assuming he is ever actually seen again in public, that is.