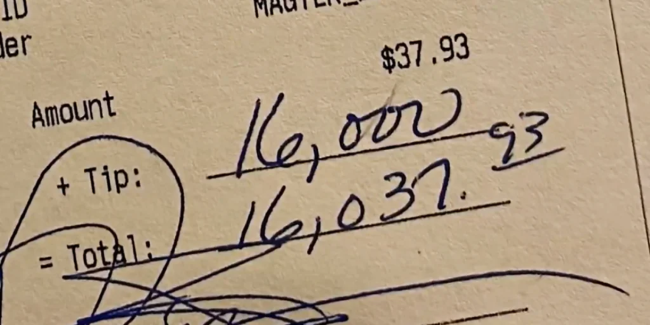 It is always fantastic when someone anonymously leaves a giant tip at a bar or a restaurant. It renews our faith in humanity.

The man, who McCudden says was not a regular, ordered a couple of hot dogs, some cocktails and fried pickles, then when he left he told her, “Don’t spend it all in one place.”

Actually he said it three times, because no one had even noticed he’d left a $16,000 tip.

“It was on the credit card statement, they put it down next to the register and he said three times, ‘Don’t spend it all in one place.’ That’s what made her flip it over and look, and she’s like, ‘Oh my god, are you serious?’ And he said, ‘I want you to have it, you guys work hard,'” owner Mike Zarella told WMUR-TV.

Once they realized what had happened, McCudden said, “We went up and we thanked him.

“It’s just been a really rough year for all of us,” she added. “For someone to do something like that really restored my faith in humanity. He just said that we work really hard and he wanted to do something nice and he just really wanted us to have it.”

Unfortunately for McCudden, the restaurant splits all the tips between all the servers each night.

The owner, Mike Zarella, says he plans to split the tip between all 12 staffers that worked that day= $1333 a piece! @Stumbleinnnh #7news pic.twitter.com/UWHE7thh0P

“I’ve been doing this a very long time and I never thought anything like this would happen to me,” she told NBC Boston.

Many on social media, while thrilled with the man’s generosity, were upset that McCudden didn’t get to keep the entire $16,000.

•everything operated as normal outside of the staff also deciding to include cooks on the tip
•the owner received none of the $16,000 amount #7news

Y’all they are reviewing the place on Google 😭😭😭😭 pic.twitter.com/6s0Q1anNgb

Nunh unh. Unless the person who left that tip specifically requested it be split between all staff or the restaurant's usual policy is to split every tip, it should go to whoever served that table. Otherwise, this amounts to stealing over $15,000 from that server.

I'd be mad for days Fam. That is my money!

When they try to split my $16k tip pic.twitter.com/Rc3I9uX0Wc

Can we talk about this guy slamming a Sam Adams and a shot of Tequila at 12:30pm first? Legend.