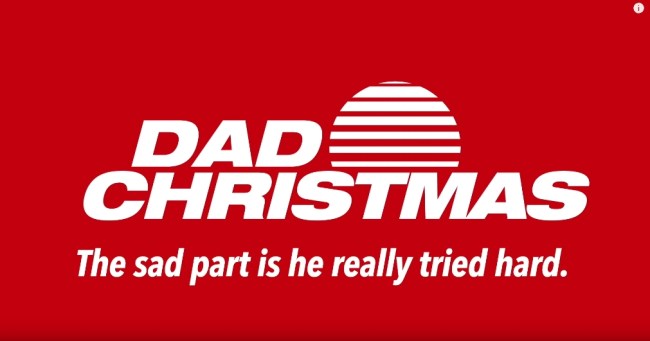 Divorce can be devastating on children, but the silver lining is that you get two Christmases. And if your parents have a really messy and nasty divorce that means you get BETTER Christmas presents as mom and dad attempt to buy your love by trying to outdo each other by overcompensating with lavish gifts. However, divorce Christmas isn’t all Xbox Ones and eBikes.

In Saturday Night Live‘s skit “Dad Christmas,” they highlight the highs and lows of spending the holidays with your newly divorced father. December 26th, otherwise known as “Dad Christmas,” is when you and your siblings get shipped off to your dad’s house who recently moved to Florida and of course became a Jimmy Buffet Parrothead superfan.

There’s plenty of smoking in the house and your dad’s new girlfriend who is a little bit off and asks you to call her by her first name. The sleeping arrangements are a little lacking and you have to rough it on a crappy futon. But it’s not all bad because dad gifts you a new smartphone. Plus “when you’re older you’ll be doing drugs there” with dear ole dad. Aidy Bryant sings a lovely parody of Wham’s Last Christmas to explain the unofficial holiday of Dad Christmas.

SNL also poked fun of how Netflix has “every show on TV.” British actor and SNL host Claire Foy appears in a new Netflix show that reimagines The Crown TV show as a teen dramedy series called Saved By The Crown.

In The War in Words skit British World War I soldier James Merchant is fighting in France and shares heartfelt love letters from the front line to his darling wife Margaret, but soon James is fighting battles on two fronts.

Foy and Kenan Thompson play hosts of the Home Shopping Network and things go awry when one of the host forgets her product of mini ceramic sculptures as big as a grain of rice in an Uber taxi.

Saturday Night Live‘s musical guest this week was Anderson .Paak and he performed “Who R U.”