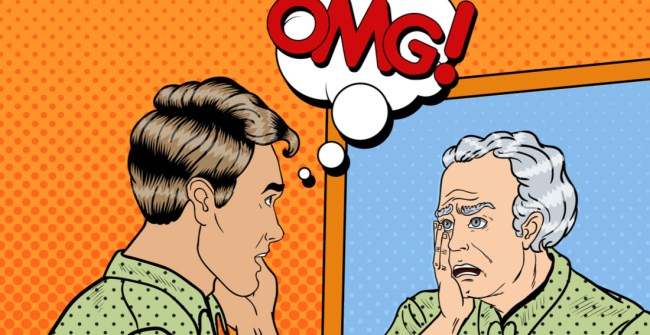 I love old people. They have lived through some amazing things and by the time they’ve reached their age they pretty much have zero f**ks left to give. A perfect example of this is an amazing dad who was filmed by his son when he tells him that he isn’t 79-years-old, but is much older. The man’s reaction is so legendary, and very foul-mouthed, that he has now become a national treasure thanks to social media.

“How old do you think you are?” asks the son.

“Higher than that?” dad asks while chuckling.

“Time flies when you;’re having fun,” replies his son.

Dad and son then start doing some math when dad figures out that next year he will be 100.

And that’s why this man, and so many like him, is a national treasure.

Check out some of these comments.

“He revealed his secret when he said ” I’m gonna be an old fuckin man” … never believe your old but always believe one day you will be.﻿”

“I hope I have such good spirits and head when I’m that age.﻿”

“I pray that not only will I live to be 98, but also be as sharp as he is at nearly a century old. Kudo’s to him. I hope he gets another twenty or so and breaks a record.﻿”

“A marker of longevity is a well preserved mind and sense of humor and by what I see here, everything indicates he still has a few more years ahead.﻿”