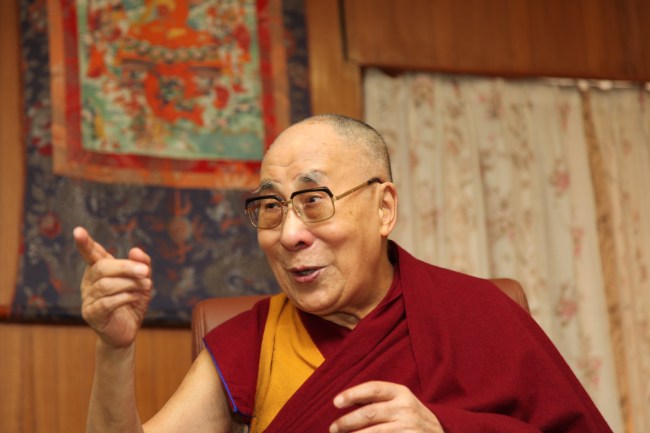 “Be kind whenever possible. It is always possible.” -Dalai Lama

“Can’t be havin’ no ugly ass butter face tramp be taking my position. Sex it up, hunny!” -Also the Dalai Lama

I woke up today and saw that the Dalai Lama, the exiled spiritual leader of Tibeten Buddhism and the 1989 Nobel Peace Prize winner, was trending. Did he turn the other cheek in the face of violence? Did he build and orphanage for the underprivileged? Cure a leper?

The 83-year-old made international headlines this week after channeling my uncle after a few drinks at Thanksgiving by saying that  if his successor is a woman, she must be hot.

This was perhaps the most surprising moment in the interview. I asked the Dalai Lama if he stood by his earlier comment that if his successor was female, she should be attractive.

“You once said that you would be open to a female successor,” BBC News reporter Rajini Vaidyanathan asked the religious leader, in a video interview published Thursday on Twitter.

“You also told one of my colleagues that, that female must be attractive, otherwise it’s not much use,” she continued. “…Can you see why that comment upset a lot of women?”

The Dalai Lama answered, “If a female Dalai Lama comes, she should be more attractive.” If not, “people, I think prefer, not see her, that face.”

The reporter asked, “It’s about who you are inside, isn’t it?”

“Yes, I think both,” he said. “Real beauty is inner beauty, that’s true. But we’re human beings. I think the appearance is also important.”

Mr. Lama went on to say that people would prefer not to look at a “dead face” and claimed that women who are in the public spotlight should always wear makeup.

The Dalai Lama, more like the DAWGGGGGGGY Lama *howling at the moon* amiright!!!

Mind you, back in 2012, the Dalai Lama told Piers Morgan that he subscribed to a vow of celibacy, but also feels temptation at times when he sees a hot lil minx.

Kabir Singh: I am the most idolized & successful misogynist ever.
Dalai Lama: Hold my shawl, son.

15 beautiful monks stand before me, but I only have 14 photos in my hand. And these photos represent the girls that are still in the running toward becoming America’s Next Top Dalai Lama