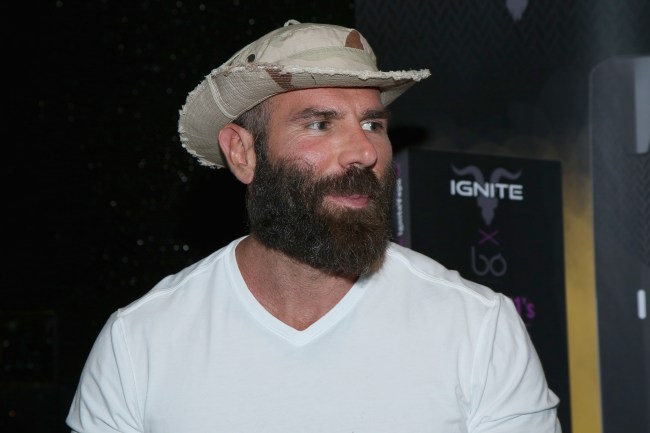 The PETA offices likely have Dan Bilzerian’s face on their bathroom’s urinal pads, as the animal rights group has taken aim at the King of Instagram multiple times over the years. Like the time Bilzerian posted a photo of one of his groupies straddling the shell of a 600-pound, 100-year-old endangered Galápagos tortoise. Or when they took issue with Bilzerian using two endangered lemurs as a photo prop while on Richard Branson’s private island.

Bilzerian is in PETA’s crosshair’s yet again after he posted an amazing video over the weekend feeding a gigantic Kodiak bear at a house party to celebrate 4/20.

The company Bilzerian obtained the bear from is Steve Martin’s Working Wildlife (not to be confused with comedian Steve Martin). Working Wildlife is a professional animal training business whose “animal actors” have been employed for feature films, TV series, album covers, charitable events, and evidently Dan Bilzerian’s 4/20 bash.

PETA has a long-standing vendetta with Working Wildlife, claiming the company has “failed to meet the minimal federal standards for the care of animals used for exhibitions established by the Animal Welfare Act.”

PETA has sent BroBible a copy of the legal complaint the company has filed with the California Department of Fish and Wildlife and L.A. Department of Animal Services in regards to the video of Bilzerian feeding the Kodiak bear.

In a letter to the Los Angeles Department of Animal Services, PETA notes that Bilzerian and Martin didn’t have the required permit for this display. They couldn’t have had one, because city regulations expressly prohibit keeping bears in the residential zone where the party took place. And in a letter to the California Department of Fish and Wildlife, PETA points out that because Martin failed to contain the bear in an escape-proof enclosure or to ensure that a safe distance was maintained between the animal and the public, he’s subject to permit revocation and a fine of up to $10,000 per violation.

“Bears belong in the wild, not in captivity, pimped out as props by shameless pseudo-celebrities like Bilzerian for Instagram ‘likes,'” says PETA Senior Vice President Lisa Lange. “PETA is calling on authorities to throw the book at scofflaw animal exhibitor Steve Martin and the man who hired him for this dangerous stunt.”

Bilzerian has responded to the claims, telling TMZ that he loves animals and says PETA just wants “to do the typical internet bandwagon on whatever is popular and come after me for feeding what seemed to be a very healthy happy bear, that was rescued at a young age.”

If Bilzerian feeding a bear sickens PETA, this video of him tugging around a giraffe at one of his bashes must give them night terrors.