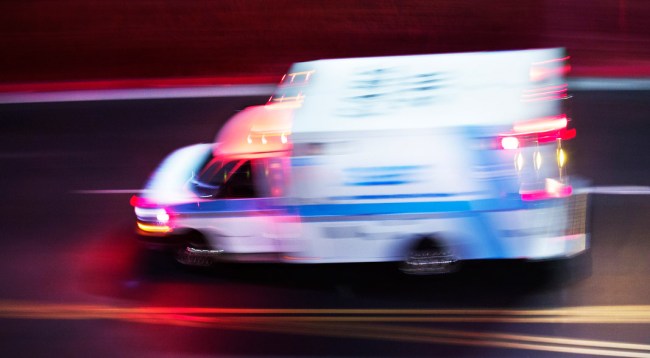 Well, here’s a new one. 30 college-age people in Clemson, South Carolina were injured when the floor they were dancing on collapsed, sending them dropping on top of one another down from the first floor of the building into the basement.

According to CNN, the clubhouse building where the collapse occured is a common area within the Woodlands of Clemson apartment complex and was built in 2004.

The apartment complex is located about three miles northeast of Clemson University, and the incident took place just hours after after Clemson beat NC State in football on Saturday afternoon.

Said one person in attendance, “It literally sounded like a machine gun. We literally were right next to the floor falling next to us.”

Amazingly, police reported that no one was trapped during the floor’s collapse and none suffered life-threatening injuries.

Police received a call at 12:30 a.m. Sunday and responded to the apartment complex on Old Greenville Highway. Officers arrived to find more than two dozen injuries, although no one was entrapped and none of the injuries were believed to be life-threatening, police said.

Larissa Stone, a sophomore at Clemson University, said she arrived to the party about 20 minutes before the floor collapsed. She said a song played that “a lot of people liked.”

“So everyone was jumping. The beat was about to drop and literally the whole floor collapsed,” she said. “It happened so quickly. I stood up, and everyone was trying to climb out. People are under other people. People are hurt. People are bleeding. I had blood on my sneakers. It was really bad.”

Watch some incredible first-hand videos of the disaster below.

#Clemson . Hope everyone is ok pic.twitter.com/pdswDDcxkG

#BREAKING: Video after the #Clemson apartment clubhouse #collapse.
This was sent to us by Jay Chavis.
Dozens have been injured and taken to the hospital. pic.twitter.com/OIEYxRoXIf

A look inside the #Clemson apartment clubhouse where dozens of people were injured after the floor collapsed.
Courtesy: Joseph Lord pic.twitter.com/tkcEqs0fxv