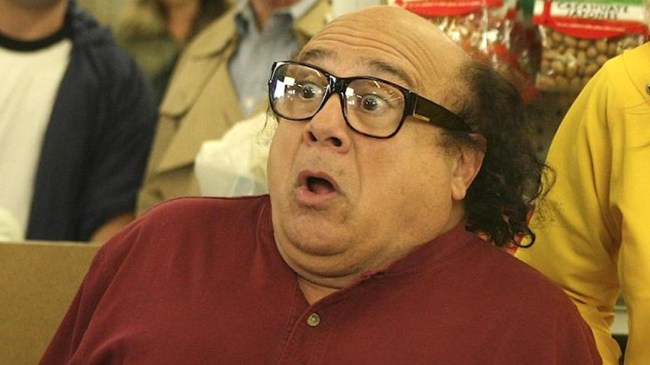 While It’s Always Sunny in Philadelphia has never shied away from controversy-stirring episodes, even the series’ creators know where the line they can’t cross is. That’s how and why It’s Always Sunny has become the longest-running live-action comedy series in the history of American television.

Danny DeVito, though, who stars in the series as fan-favorite Frank Reynolds, apparently didn’t know where *that line* was as he recently told a story about how he got fooled by a particularly brutal fake Always Sunny script that Charlie Day and Glenn Howerton and Rob McElhenney sent him as a prank.

It should be noted that Always Sunny has been aggressively pushing boundaries for 15 seasons now, so the below story — while certainly quite shocking when viewed through the abstract of reading an article about it online — is actually quite par for the course when it comes to the legendary FX comedy.

During an interview with Uproxx, the beloved 77-year-old actor told a hilarious story about the Always Sunny creators pranking him with a fake script that involved his character Frank being raped quite a bit.

“They once put me in a situation that was like, I was in jail being raped by various inmates and I was at the end of my rope,” DeVito said. “This was not recent. This was a while ago. Somewhere in the middle. And I got a script that my assistant said, ‘Oh, the guys, Charlie [Day] and Glenn [Howerton] and Rob [McElhenney] called up this morning.’ I was going to work that day. We were going to read through. He said, ‘Well, they’re changing it up. They’re doing this one first instead of that one. So you should read it.’ And I thought, ‘Really? It’s like 10 o’clock in the morning.’ I said, ‘Well, I’m going to work at 1:00.’ ‘No, you should read it. They want you to read it.’”

DeVito then detailed his reaction when he read the script, which upset him to such an extent that his first reaction was to “call his lawyer”:

“So I read it and I go to pick up a hooker and I get busted and I get raped in the jail, in a shower,” he said. “Then they throw me in the lockup, the big lockup. I get raped by everybody and the cops. And they kept going back to the bar and then Frank would get raped. And I go back to the bar, Frank would get raped. And I said, ‘What the fuck, man? Call my lawyer.’ Right? And then I got to the end of the script. And the last guy that nailed me leans in. Well, Frank is now laying on the ground, [his] face is on the ground. He’s been fucked by every… And the guy leans down and he says, ‘April fools, bitch.’ And I realized it was April 1st. They wrote this script in order to break my balls.” [via Uproxx]

Unsurprisingly, though, Devito ultimately found the humor in the prank:

“It’s love,” DeVito said. “They love me. I called them up. They were all on the call, laughing their asses off. And then we went and did some other crazy show.”

All 15 seasons of It’s Always Sunny in Philadelphia are currently streaming on Hulu. Luckily for fans, the series has already been renewed through its 18th season.

RELATED: The Guys Behind ‘It’s Always Sunny’ Are Launching A New Whiskey Brand For A Great Cause