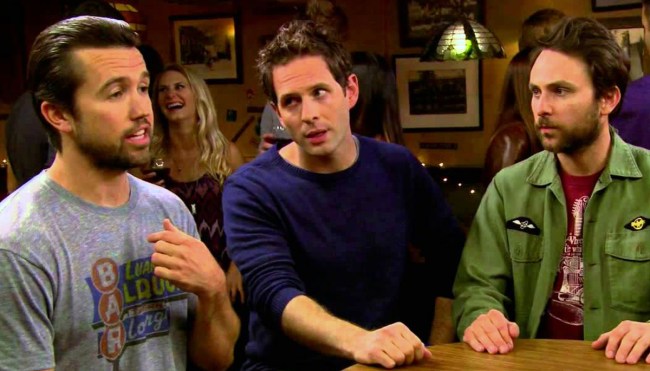 It’s been over 15 years since the first episode of It’s Always Sunny in Philadelphia aired on television, and while it may have flown under the radar at first, it didn’t take long for it to build a loyal following en route to officially becoming the longest-running sitcom in television history when its 15th season debuted last year.

It’s Always Sunny has been described as “Seinfeld on crack,” which is a pretty fair summation (especially when you consider Dennis and Dee get addicted to the drug in multiple episodes). However, I think most fans of the show would agree “Seinfeld if everyone had a crippling drinking problem” is probably slightly more accurate when you consider it revolves around a group of (barely) functioning alcoholics who own the bar that serves as their de facto clubhouse.

From what I’ve been able to gather since Glenn Howerton, Rob McElhenney, and Charlie Day launched The Always Sunny Podcast, the guys who play Dennis, Mac, and Charlie (respectively) are infinitely more affable and charming than the characters they portray on the show that launched them to fame.

With that said, all three men do have at least one thing in common with their characters: their love of booze (which landed Howerton in some very hot water when he was in college).

As a result, it’s only natural they’re the latest group to get in on the Celebrity Alcohol game, as they recently announced the impending launch of Four Walls, a new whiskey that just made its grand debut. .

It’s a fairly natural step for the trio (especially when you consider McElhenney joined forces with Ryan Reynolds to by an English soccer team a year after striking up a friendship with the help of the latter’s Aviation Gin), as Howerton said the brand is their way of “celebrating the four walls that have held our favorite memories in and kept our troubles out.”

According to The Hollywood Reporter, they’ll also be celebrating the people who help run those watering holes by donating the money they make to the Hospitality Assistance Response of Pennsylvania, which was initially established to help bar and restaurant workers who were impacted by the pandemic.

As for the whiskey itself, Four Walls will feature a couple of different varieties.

The first is a cask-strength 15-year-old Irish whiskey that will set you back a hefty $995.95 (although the 755 bottles that were produced are accompanied by a fancy wooden box and autographs from all three men).

The second is slightly more reasonable at $89.95, and the 2,500 bottles that were made contain five-year-old Irish whiskey blended with a five-year-old rye from Pennsylvania’s Wigle Whiskey (the liquids from the Emerald Isle were produced by Cooley and Great Northern, although its unclear which distillery’s product ended up in each version).

All three actors are whiskey enthusiasts, so while the price tag for both may be a bit steep, I highly doubt you’re going to be disappointed in either liquid (and if that ends up being the case, at least you can take some solace in knowing it was for a good cause).