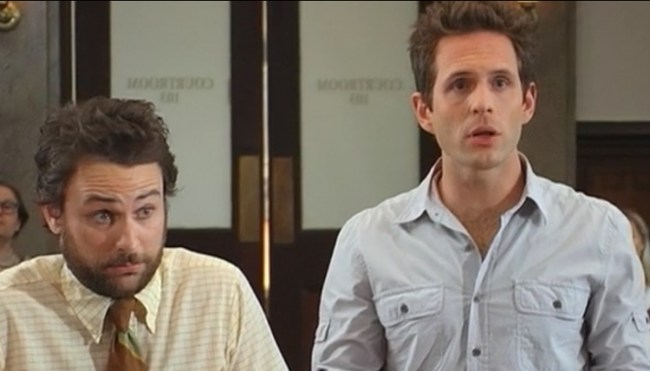 It’s Always Sunny in Philadelphia recently became the longest-running live-action sitcom in television history on the back of the many wacky hijinks (and serious crimes) some of the most irredeemable characters to ever grace the screen have perpetrated over the course of 15 incredible seasons.

By most accounts, the actors who portray the despicable members of The Gang don’t have that much in common with the characters they play. However, based on what one of the show’s creators recently revealed, he’s not as innocent as you might think.

It’s Always Sunny came hot out of the gate in its first season by tackling a number of controversial topics. The subject that was explored in “Underage Drinking: A National Concern” is relatively innocent compared to the other hot-button issues it attacked early on, but the same cannot be said about the series of actual decisions made by Glenn Howerton in relation to that particular matter.

On a recent episode of The It’s Always Sunny podcast, Howerton—who plays the impressively horrible Dennis Reynolds—sat down with Rob McElhenney and Charlie Day to reflect on “The Gang Gives Back,” an episode from season two where Dennis, Charlie, Dee, and Mac are forced to coach two youth basketball teams while doing community service after burning down a building.

Toward the end of the podcast, the trio discussed their time doing community service in real life, with Day saying he was forced to give back after getting busted for underage drinking at a party and McElhenney admitting he got in trouble for a couple of minor incidents in his youth.

Those tales had nothing on Howerton’s, who dropped a bit of a bomb when he revealed he made “an extremely bad error in judgment” when he was in college:

“I tried to get a fake driver’s license from the DMV down in Miami. They took that very, very seriously. I was actually charged with four felonies. So, technically, I have four felonies on my record.

It got expunged because I was a first-time offender, so they were lenient, but I don’t think I could join the FBI. It was a serious, serious offense. Every time I signed my name—they had me sign my name four times—every signature was a felony.”

Thankfully, it appears the career path Howerton did choose worked out pretty well for him, so I don’t think being unable to join the FBI will be a huge issue.