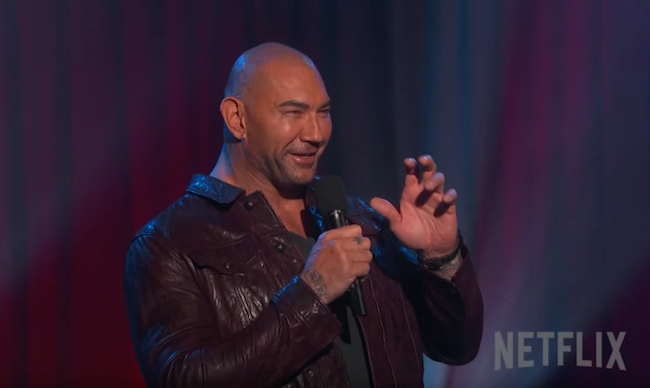 Dave Bautista made a career in the WWE by being an “animal” and typically dead-serious about his matches.

Except for, you know, that WrestleMania moment.

The former champion’s movie career has been just as successful as his time in the ring but the former bodybuilder is making a name for himself as a comedic actor.

He’s in the new buddy comedy, “Stuber”, with Kumail Nanjiani, stole several scenes as Drax in the “Guardians of the Galaxy” and “Avengers” films, and will star as the comedic lead in the forthcoming film “My Spy.”

But can the 6’3 hulk do stand-up comedy?

In this clip from “Jimmy Kimmel Live”, the former WWE star admits he’s never done stand up before but when Netflix throws $10 million on your lap, you give it a shot.

Luckily, he had a trailer to show the Kimmel crowd.

I’m all for a reality show where celebs try stand up comedy. I’d watch every damn week.