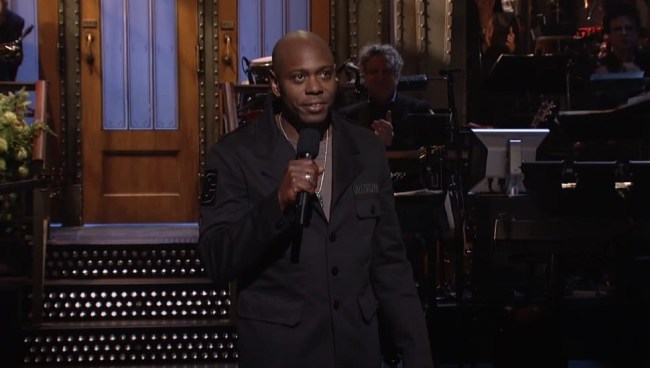 Last week, co-worker Doug wrote an article about a scientist who believes there’s a 50% chance that we’re living in a simulation. And while I’m not a scientist (although I was referred to as the “blunt doctor” back in college due to my ability to remedy broken smoking apparatus), I actually think University of Oxford professor Nick Bostrom is actually selling his odds a little short here, as I’d peg our chances of our reality being a simulation at about 70%.

The Matrix is glitching constantly to the extent where it almost seems on purpose. I’ll constantly “joke” that our robot overlords are laughing at us. Dave Chappelle, once again, hosting Saturday Night Live after the election counts as one of these glitches in the Matrix.

As you probably remember, Chappelle — who was in the early stages of launching his now-firmly re-established comeback — famously hosted the first Saturday Night Live following Donald Trump’s upset victory, and infamously said that we should “give him a chance” because he hoped that he’d give the “historically disenfranchised” among us a chance too.

In the years since, Chappelle has vehemently renounced those post-election statements, as he quite simply put it in May of 2017, just months into the Trump administration, “I was the first guy on TV to say ‘Give Trump a chance.’ I f***ed up. Sorry.”

A couple of months later during an appearance on The Late Show with Stephen Colbert, Chappelle clarified that it wasn’t that he “wanted” to give Trump a chance but that he simply felt it’d be the right thing to say at the time.

Now, here we are four long years later and Chappelle is once again set to take the SNL stage following a country-shaping election. As a member of the generation that idolizes Dave Chappelle and his work, I’ll be tuning in regardless of who wins (or who’s leading) this week. However, more than the monologue he does end up reading, I’d be fascinated to also hear the one he doesn’t read but you know he had prepared if the election turned out the other way.