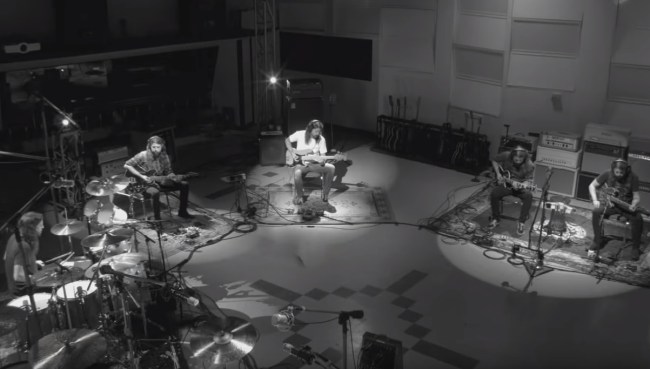 Since last June, Dave Grohl and the Foo Fighters have traveled around the world for their Concrete And Gold Tour. The tour doesn’t wrap up until October 18, 2018, in St. Paul, Minnesota. Despite having a grueling tour schedule where the great American rock band performs every other day and many back-to-back events, Dave Grohl has been working on yet another project.

The Foo Fighters frontman has been working on a project called “Play” and it includes a two-part documentary as well as a new solo song. The new track isn’t Grohl strumming the guitar and singing. That would be too easy. The new song is a Pink Floyd-esque 23-minutes long and features Grohl playing seven different instruments himself. We expect Grohl to rock the drum kit and guitar, but seven instruments is impressive. I mean, want band wouldn’t want Dave Grohl on the tambourine?

“Watching my kids start to play music and learn to sing or play drums, it brings me back to the time when I was their age listening to albums, learning from listening… and when I take my kids to the place where they take their lessons, I see these rooms full of children that are really pushing themselves to figure this out,” Grohl said. “And even now, as a 49-year-old man, I’m still trying to figure it out… it’s not something that you ever truly master. You’re always chasing the next challenge, and you’re always trying to find a way to improve on what you’ve learned.”

Oh, and besides playing the music, Grohl also directed the documentary. Now he’s just showing off. The seven-piece one-man band created the Play doc with writer and producer Mark Monroe who worked with Dave on Sonic Highways, and has been involved with other high-profile documentaries such as The Cove, Icarus, and Mission Blue. Cinematographer Brandon Trost from The Disaster Artist and This is The End captured the process.

“The film is intercut with young musicians from the Join The Band music school in the San Fernando Valley practicing their craft, working relentlessly to get it right, and always coming back to the conclusion that, in Grohl’s words, ‘just like any kid, the reward is just to Play,’” Grohl’s production company Roswell Films explains.

Play will be released to streaming services on August 10th. A limited edition vinyl will be offered on September 27th. Both can be pre-ordered on the Foo Fighters website. Maybe after the tour Dave Grohl will relax and have a beer, but you know he won’t and will write a new Foo Fighters album by Christmas.