Dave Matthews Talks About How He Writes A New Set List Every Night, Reflects On His Love Of Hugging 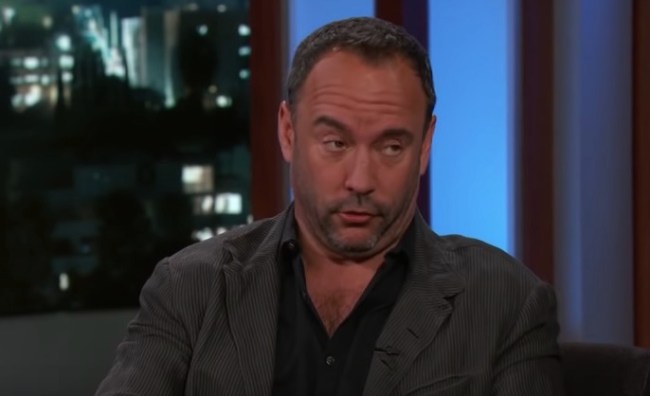 The Dave Matthews Band wouldn’t exactly qualify as a ‘jam band’ but they certainly operate with a similar style. There was a time, decades ago, when they might’ve been considered a jam band but that got lost with the commercial success of the band and Dave himself becoming a celebrity/actor.

They tour hard all Summer long and play as many shows as possible. Over the years, the Dave Matthews Band has pumped out 9 studio albums, 83 live albums, 8 video albums, 21 music videos, 2 EPs, and 29 singles.

They’ve sold more than 33 million albums in the US because they’re able to keep it fresh while still playing the hits. With over 210 songs in rotation, they’re able to produce fresh setlists every concert.

Going back to my point above about being a jam band, one of the things jambands like Phish does is go on stage without a set list. They wing it out there and let the concert go where it goes by playing what feels right at that time. Dave doesn’t do that.

READ NEXT: Dave Matthews Talked About How A Cringeworthy Samurai Movie Inspired Him To Write A Song

Before each show, Dave Matthews grabs his chart of all the DMB songs and puts together a fresh set list for the night. He looks ahead to coming concerts, factors in playing at the same venue for multiple nights, etc.

As a guest on Jimmy Kimmel Live last night, Dave Matthews talked about how he puts together set lists to keep the fans wanting more and he talked about his love of hugging. Apparently, he hugs too freely and often. The dude’s a hugger and has tried to pull it back over the years.

CHECK IT OUT: Dave Matthews Singing Trap Hits By Migos And Cardi B Is The Highlight Of My Week

The last time I saw Dave Matthews Band was a few years back on Governor’s Island in NYC when we were all waiting for some hurricane to hit the next day and if I’m being honest, it was pretty awful.

The opening festival acts blew DMB out of the water. The crowd was screaming the lyrics to every song at the top of their lungs between drags from the clove cigarettes. It didn’t seem like the band’s heart was in it, or maybe I just wasn’t into it.

DMB was pretty damn good back in the late 90s and early 00s but something changed. Maybe it was their music, maybe it was me. Probably both.