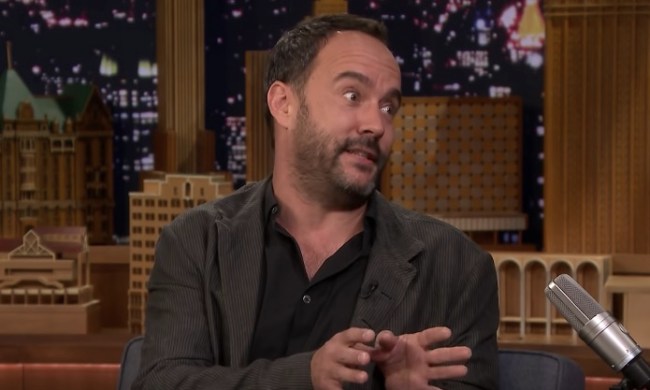 Dave Matthews was a guest on The Tonight Show Starring Jimmy Fallon last night and he was in full-blown storytelling mode. As you can imagine, this is Dave’s best mode because he’s a natural storyteller. Maybe he’s just getting tuned up for Summer Tour which has DMB playing in Mansfield tonight, Hartford tomorrow, and then two dates in upstate New York, or maybe Dave was just in a good mood, but he seemed to be sharing quite a bit about his life.

The first story he told was about how a cringeworthy movie titled Samurai Cop inspired him to write the eponymous song from DMB, and in his second story he talked about how Ryan Gosling ruined his one and only karaoke experience. First up, the Samurai movie story:

Here’s Dave talking about doing karaoke with Ryan Gosling and how he responds when people ask him to play their weddings:

It has to be pretty awkward to be a world-famous musician and not be able to ever attend any wedding without assuming people will be asking you to get on stage at some point or another. Even if you’re just a minorly successful musician who had one big hit on the radio, you know that they’re going to ask you to perform it at some point. Now imagine you’re Dave Matthews with a thousand love ballads. He’s better off sending a check and never attending a wedding.