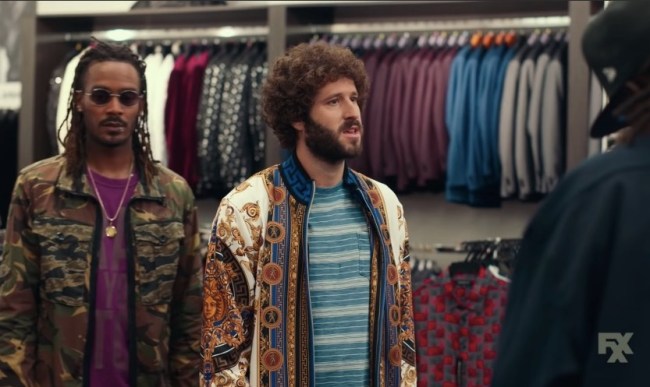 The series — which was produced by Kevin Hart and was co-created by Burd and The League creator Jeff Schaffer — follows Dave, “a suburban neurotic man in his late 20s who has convinced himself that he’s destined to be one of the best rappers of all time.” Sound familiar?

The first season of Dave is set to be start-studded, as it will feature cameos from the likes of Justin Bieber, Kim Kardashian West, Tierra Whack, and YG.

Speaking to Entertainment Weekly, Burd explained how he got a star as big as Bieber to appear in the first season.

“I’m friends with Justin, he’s been on one of my songs, and I’m on his new album; we’ve had a good relationship since I met him a few years back. And when I wanted to make an episode about my first ‘Hollywood’ experience, and about becoming famous in general, I thought back to a night in my life where I was around celebrities for the first time…and sure enough, it was the night I met Justin and Kourtney Kardashian.

So I asked both of them to be a part of this episode. Justin was totally game; he’s so charismatic and natural that it was easy for him to play himself. It wasn’t a hard sell at all. I think I’ve got Justin’s full belief as a creative, which is really validating, because he’s an icon. And I wanted my character in the show to feel that same level of validation that his belief has given me in real-life.” [via EW]

Dave, which will air on FXX and FX on Hulu, premieres on Wednesday, March 4.