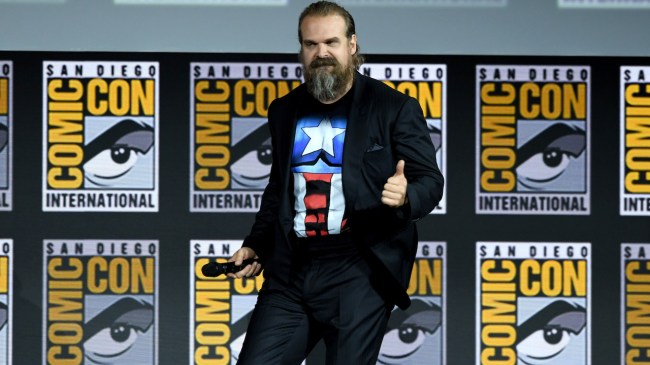 Has anyone in Hollywood had a bigger come up in recent years than David Harbour?

Spending the previous decade as a background character actor, Harbour is now a full-blown household name.

Thanks to his Stranger Things fame — which has largely become one of the most popular shows in the world thanks to Harbour’s performance as Chief Jim Hopper — Hopper is now an A-lister, headlining action movies opposite Chris Hemsworth (Dhaka, due out on Netflix later this year or early 2020) and Marvel Cinematic Universe movies opposite Scarlett Johansson.

While Harbour’s first foray in franchise film-making didn’t go as well as he’d hoped — Hellboy was a *massive* bomb — his second attempt is sure to be a home run, has Marvel Studios essentially prints billion-dollar movies these days.

And following Marvel’s epic presentation at Comic-Con this year, we finally know who exactly Harbour will be playing in the MCU: Alexei the Red Guardian.

Considered to be “Russia’s answer to Captain America”, The Red Guardian — who first appeared in 1967 — was once married to Black Widow in the comics.

“In the Cold War, there was a nuclear arms race and the Americans developed all these armaments, including Captain America,” Harbour said during the Black Widow panel.

“The Soviets retaliated by creating their own version, called the Red Guardian. But he’s somewhat different than Captain America. He’s a very complicated guy, and that’s what I love about him. Alexei, he’s a tremendously flawed guy and also has tremendous humor and tremendous heart.”

Given Harbour’s description, despite his Russian ties, it sounds unlikely that Alexei the Red Guardian will be an outright villain and more of an anti-hero, and perhaps love interest (although I have my doubts) of Johansson’s Natasha Romanoff.

Black Widow, which stars Scarlett Johansson, David Harbour, Florence Pugh, and Rachel Weisz, will be released in theaters in the United States on Friday, May 1, 2020.