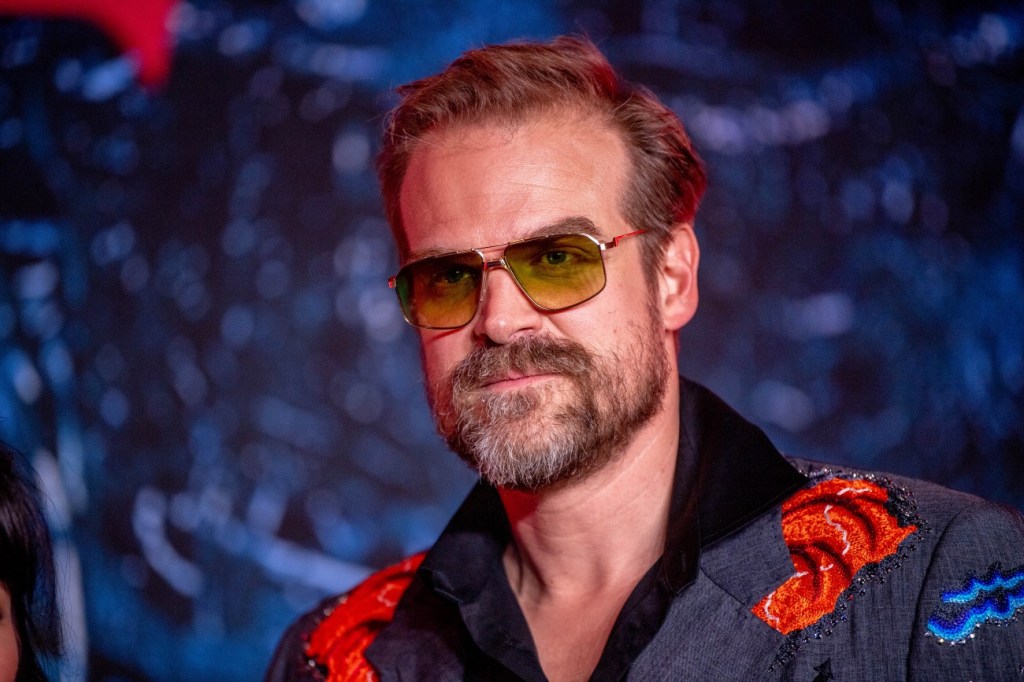 Coming into Season 4 of Stranger Things it was unclear how the show would address actor David Harbour’s character Jim Hopper. The fact that he was even still alive was a shock at the end of Season 3 with how things played out but his plotline proved to be as important as any in Season 4.

There are some spoilers ahead for people who haven’t watched Season 4 of Stranger Things, so be aware of that… And for the tens of millions who did watch Season 4, the drastic weight loss from David Harbour was very apparent. Especially in that scene where he took his shirt off with Joyce and the camera honed in on how beaten, scarred, and skinny he was.

David Harbour posted his body transformation on Instagram. In total, he lost a shocking 75 pounds and went from “265-270 in season 3 and all the way down to 190” when they filmed season 4. What’s wild is he lost the weight and then had to keep it off for a year because of delays in filming.

Here are three pictures (scroll to the right) of David Harbour’s massive body transformation and 75-pound weight loss that he kept off for well over a year.

If that caption isn’t loading for you, it reads:

Many of you have asked about Hopper’s physical transformation from season 3 to season 4. My trainer @davidhigginslondon worked with me for 8months to make the transformation, and then another year to keep it through the pandemic. All told it was a difficult and exciting ride, changing diet and exercise plans (or lack thereof).

We are gonna do an Instagram live tomorrow Friday at 4pm UK time, which is 11am eastern I believe. Wanna answer questions you may have with @davidhigginslondon and tell you what I learned. Second pic is me and David the week we began, my resistances and fury flaring. And pic three is the shoot day, the black x’s are for cgi scarring because of problems with the practical effect.

All told I lost over 75lbs. 265-270 in season 3 and all the way down to 190 when we shot. Recently ballooned up again to play jolly ole st. Nick in a flick I can’t wait for you to see this holiday season, so I am struggling to fight back down towards a good weight for wherever hopper ends up in season 5. All this up and down is not good for the body, and I’ll have to give it up soon, but it is such a fun part of the job to live in a different version of your skin for a while. Come join us tmrw for the live and bring qs

David Harbour will be going on Instagram Live at 11am on Friday morning with his trainer and he’s asking for questions about his body transformation and weight loss. The most glaring question I have is ‘how much did it suck?’

Because we’re all capable of weight loss and keeping the weight off but it requires cutting out all of the fun things in life to eat and drink. I’m curious how bare bones his diet was for the entire year and what that did for his overall mood.

Harbour’s trainer is a Trainer to the Stars

David Harbour’s trainer, David Higgins, has trained Marvel actors Simu Liu, Richard Madden, Kumail Nanjiani, and others. He’s clearly one of the best on the planet at getting actors into shape for films and TV.

Actor David Harbour is 6’3″ with a pretty wide frame. The natural weight range for that height is anywhere from 176 – 216 lbs. So it’s not as if Harbour’s body wasn’t able to handle being skinny like that, it’s more that the weight loss and body transformation was so drastic because he was heavier set before (270) pounds.