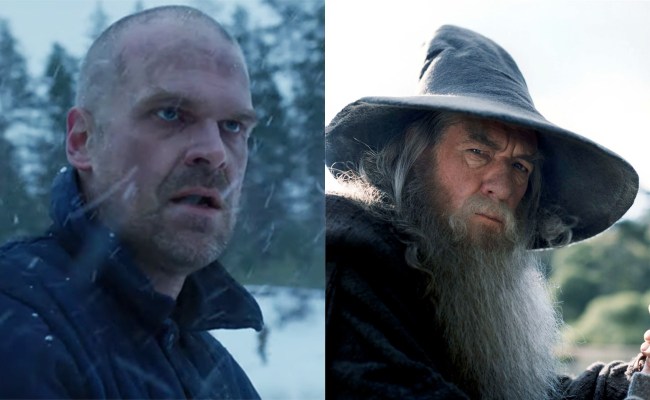 Hey, remember Stranger Things!? Been quite some time, hasn’t it? Season three of the nostalgia-soaked hit Netflix sci-fi series dropped back on July 4, 2019, which is almost two years ago now. It’s taken so long, in fact, that unless they build some sort of forward-time-hop into the future of the series, it wouldn’t surprise me if they began filming the fifth (and likely final) season right after they wrap production on the fourth, because those kids are GROWING. Caleb McLaughlin, for example — the actor who plays Lucas Sinclair — is now 19-years-old. The dude is 24 months away from being able to sit at a bar. The last time we checked in with those Hawkins rascals, they were barely entering their teenage years! The point being: unless Stranger Things 5 is set during their high school years, the clock is ticking. But I digress — back to our BOY David Harbour (who also happens to be a scene-stealer in the upcoming Black Widow).

In a recent interview with Collider, Harbour was naturally asked about the long-gestating fourth season, to which the breakout star replied that it’s his favorite season yet, primarily due to the Gandalf the Gray-esque arc that his character, the beloved Chief Jim Hopper, experiences:

“I can talk about Hopper. I guess I say this about a lot of seasons, but it’s my favorite season, in the sense that he’s at his purest, he’s at his most vulnerable, in a sense,” Hopper told Collider.

“He’s been, as we’ve seen, he’s in this Russian prison, so we get to reinvent him in a sense. He gets to have a rebirth from what he had become, and we’d always sort of planned this almost resurrection of you have Gandalf dies, Gandalf the Grey re-emerge, and I’m really interested in this resurgence of him. We get to explore a lot of threads in his life that have merely been hinted at that we get to see a lot more of. And there’s some real surprises that you know nothing about that will start to come out in this and play big as the series goes on.”

First things first: I believe Harbour means Gandalf the White*, as that’s the version of the legendary wizard that reemerges after fighting the Balrog to the death in Moria. No shade to the big fella, of course, just doin’ my job here.

If you’ve seen Lord of the Rings, you know that Gandalf the White is essentially the upgraded, more powerful version of his Grey predecessor. So if you apply that logic to Hopper, that means he’ll be ripping twice as many heaters, crushing twice as many Busch Lights, and cold-cocking twice as many bad guys, which will apparently be RUSSIANS this time around. This character is truly on his way to becoming an 80’s action icon.

Harbour then went on to further elaborate why he loves season four so much, specifically highlighting the writing from the Duffer Brothers, the creators of the series:

“[Season 4] is really my favorite season. I just love it. The scripts always get better and these guys, they started out, and Season One is so tight and good and intimate in a certain way, it’s so good. And these guys go in different directions, of which the fans have multiple takes on, but I will say, the writing continues to be of its particular, specific genre, whatever they’re doing each season is just extraordinary. And this, again, we top it. Like I feel it’s a big, beautiful season. I can’t wait for people to see it.”

Unfortunately for us, Hopper didn’t give any indication as to when Stranger Things 4 will finally release. If I had to guess, I think Netflix is going to try to squeeze it in before the end of the year, perhaps late November or early December. Again, that’s just my best guess (and also hope).

The first three seasons of Stranger Things are now streaming on Netflix.