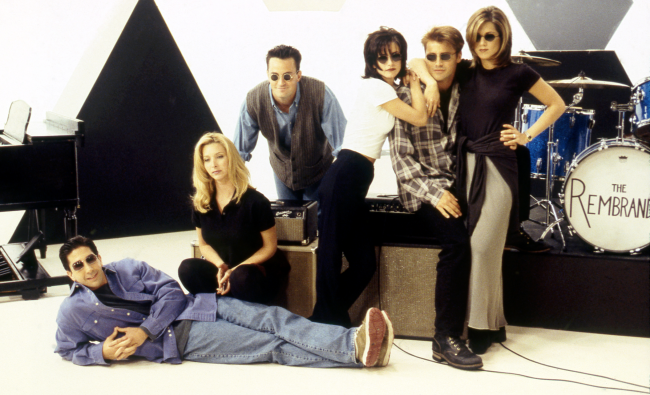 If you had David Schwimmer getting ripped by an animal trainer for his rant criticizing Marcel the monkey during the Friends reunion show on your bizarro bingo card this week, give yourself a prize.

The reason for the animal trainer’s anger stems from David Schwimmer’s comments on the HBO Max special.

“Obviously it was trained and it had to hit its mark and do its thing right at the perfect time, but what inevitably began to happen was we would all have choreographed bits kind of timed out and it would get messed up because the monkey didn’t do its job right,” said Schwimmer. “So we would have to reset, we’d have to go again because the monkey didn’t get it right.”

Schwimmer then added, “So the monkey would be sitting on my shoulder, take some grubs, break them in half, the squirming live grub, they ate it, and then it would just go like that (put its hands on his head).

“I’d have monkey grubby hands all over. It was time for Marcel to … to, f— off.”

Marcel’s trainer, Mike Morris, did not take too kindly to Schwimmer’s comments about the now deceased monkey in a recent interview with The Sun.

“I have never ever watched Friends because of Schwimmer’s comments about the monkeys,” said Morris.

“I have refused to ever since he did an interview after the animals got written out of the show and he said they tried to bite him and throw poop at him. They didn’t do any of that. None of it is true, when I was there none of that ever happened.

“I didn’t speak out back then but I am now,” he continued.

“Of course, I didn’t watch the reunion interview but I heard from others what Schwimmer said. I just don’t agree with it, if anything he threw off their timing if we want to be truthful.

“Schwimmer was fine with the monkeys for the first couple of episodes and happy to be there. But people would laugh at the monkey and I think he got jealous because it wasn’t him getting the laughs.”

Morris added that Schwimmer seemed “a little bitter” about the monkeys being on set which made the monkeys not like working with him.

“If you have an actor that’s not very helpful, it makes it even worse,” said Morris.

“My colleague who also worked on the show says that people would laugh at the monkey and throw Schwimmer off. He’s not the kind of actor who can improvise.”

“The other capuchin who played Marcel was called Monkey and passed away recently away from cancer so Schwimmer was talking ill of the dead when he made those comments,” Morris continued. “I find it despicable for him to still be speaking ill of her.”

He says Jennifer Aniston and Matt LeBlanc got along fine with the monkey.

“The rest of the Friends cast were nice,” said Morris.

Heck yeah. Phoebe even took a tranquilizer dart for the simian.