Guy Playing Guitar Gets A Request For A Steve Vai Song, Proceeds To Completely Blow Everyone Away 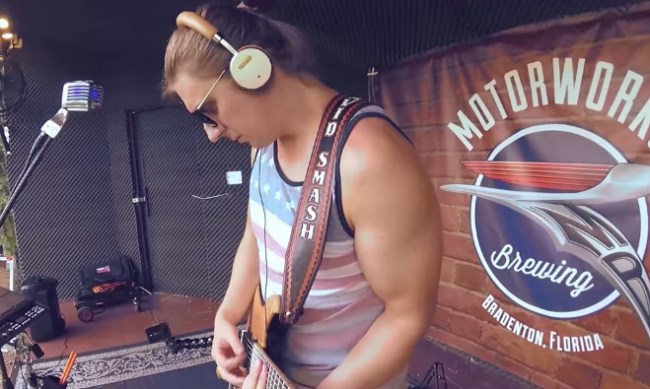 David Smash is a local musician in my hometown of Sarasota, Florida. This video was actually uploaded to YouTube back in mid-August but it’s since blown up and is now at over 1.25 million views. In this clip, David Smash is actually playing at Motorworks Brewing just a bit north of Sarasota, up in Bradenton, Florida. He’s playing the guitar when a fan calls out and requests ‘Tender Surrender’, a song by Steve Vai.

David has a camera attached to his guitar, and we can see him go through the motions, re-learning this song on the spot before blowing away everyone in the crowd (probably 15 people) and over a million people on YouTube. This is what talent (and practice) looks like in motion, and it’s pretty fucking incredible. Sarasota’s award-winning Herald Tribune caught up with David Smash to ask him about his YouTube success and here’s what he had to say:

“It’s really overwhelming, exciting, also humbling, just the fact that Guitar World would write an article about somebody like me, ” Smash said. “I wasn’t even expecting anything to come out of it.” (via)

I was born and raised in Sarasota, and moved back about 2 years ago after living in NYC for almost a decade and it’s crazy to see how much the town/city has changed in the time I was gone. When I left Sarasota for New York there was a handful of good bars to choose from, mostly out on Siesta Key, in Gulf Gate, and in downtown Sarasota. These days, there is a handful of good breweries to choose from when there wasn’t a single brewery in town 10 years ago. It’s awesome. I love seeing a video like this where a local musician is blowing up on YouTube and the world is able to catch a glimpse of his talents. You can find David Smash on Twitter, Instagram, Facebook, and subscribe to YouTube to keep up with this talented musician.

You can read more about what life is like for an overnight YouTube sensation in this article on the Herald Tribune by local Entertainment reporter Jimmy Geurts.