Dear Diary, Day 2: Prison Workouts Are Harder In The Suburbs 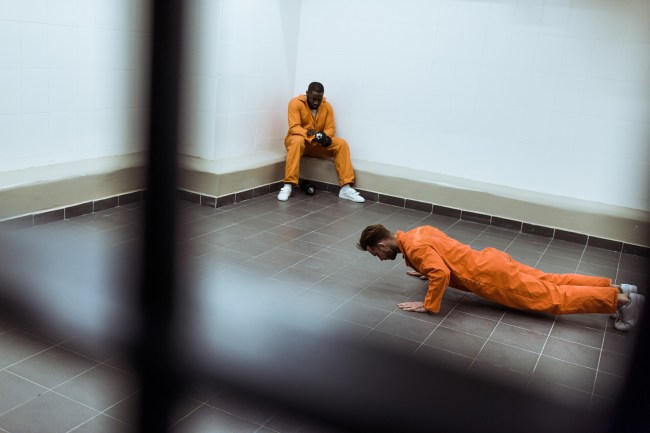 Each day is a blessing. We say that at each meal, with each cup of coffee, to convince ourselves. When I woke up this morning, the trees outside our bedroom window appeared closer than yesterday, like the woods of Dunsinane from Macbeth. It’s so damn quiet here in New Hope, Pennsylvania.

I ordered an XBox on Amazon. I have three days to figure out how to tell her. I haven’t played video games in a decade, but I figured it’s never too late to give up. It was between that and a skateboard. I’ve wanted to hone a skill while we’ve got all this time. Then I had visions of practicing kickflips, under-rotating the board, landing on the trucks and pulling up my pant leg to reveal a compound ankle fracture. I hardly want to be the one guy at the hospital with something other than the Rone Ranger. So I went with the XBox.

She cooked us pork for dinner. I sliced it perfectly. Her parents’ knives are so much better than my knives. You don’t know what you’re missing until you get your hands on some expensive knives. I used a carving knife last night but I spotted a fun paring knife that I’m excited to try tonight. If we ever make it out of this, the first thing I’ll buy is a new set of knives.

We tried a partner workout. I derived it from a prison documentary I watched on a JetBlue flight on the A&E channel. I stripped off a long band of linen from the guest sheets to use as a jumprope. As I jumped rope for 100 reps, she did a wall sit. Then we switched. Your wall sit duration was determined by how long it took your partner to jump rope. Of course my wall sit went on forever as our rope kept getting tangled in her feet, which she found funny. “It’s too light,” she laughed as my knees wobbled with fatigue. “It’s made of a fucking SHEET!” I screamed. “ADAPT.”

Next, plank holds while your partner ran around the house twice. By screaming at her, I coached her into the right mentality to complete the house laps fast. This one went off without a hitch.

We ran these exercises a few times through. In doing everything together, we are growing stronger as a couple. What choice do we have? I pitched the idea of “isolation time”—just an hour or two each day where we don’t interact, no matter what, no matter how badly the recycling is begging to be taken out. She shut the idea down, citing health concerns. I am forced to pleasure myself in the garage.

We started Narcos: Mexico last night. The subtitles were off though, improperly synced. Not that it mattered. The scenes of marijuana yields burning at the hands of the Mexican authorities had me hitting my vaporizer so rapidly that I could hardly be expected to read a TV show. I gave up and watched for the gist.

That’s all for today. As ever, stay safe. The world is counting on you.