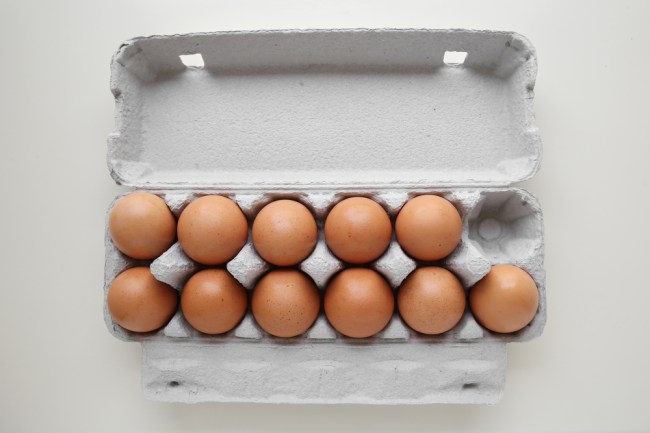 Twitter, a melancholic abyss where people scream out their opinions on everything from politics to sports to how to properly remove eggs from the carton. If you didn’t think that the way you take your eggs out could be a highly divisive issue, you just don’t understand how Twitter can be an inescapable hellhole of biased beliefs and a place for the instant rise of presumptuous authorities on every subject no matter the discipline.

There seemed to be three distinct tribes in the egg removal debate: those who take eggs from the outside rows until you get to the center, those who take eggs from the center rows and work your way to the outside, and the chaotic “take whatever egg you feel like because you’re not an OCD maniac” group. The left to center proponents argue that we read from left to right, so we should apply that logic to egg removal. Plus, being left-handed and right-handed determines what side you take your eggs from. The take the center eggs first crowd claim that by taking the eggs in the middle, it keeps the carton balanced when you transport it in and out of the refrigerator. The chaos crew that takes random eggs out of the carton are unhinged anarchists who don’t give a care to logic.

It all started when Brian Faughnan asked what he assumed was an innocent question, little did he know he would ignite a fiery Twitter debate that started the hashtag #EggCartonTwitter.

Hey OCD folks. Do you empty the egg carton right to left, or left to right? pic.twitter.com/SfkJO6KgmB

Soon, the opinions and hot takes on eggs raged onto Twitter like the unstoppable wave from The Day After Tomorrow. Many Twitter users attempted to gaslight an entire nation and cause them to question their own sanity of how they’ve been removing eggs from the carton for decades.

Left to right, obviously. What are we, savages? https://t.co/vysUuePeQW

Only crazy people don't go through eggs in an egg carton from left to right. https://t.co/wYDuP2Kwqh

You empty it from the middle out.

Do I really have to explain optimal egg carton firing order?

That is a terrible idea. You're supposed to use them from the center on out to the sides. Anything else is an error.

I empty it evenly from either side so that when I take it out of the fridge, it doesn’t open up and spill eggs.

I too am surprised & troubled about an entire cultural subset of lunatics who pull their eggs from the center out https://t.co/TEyirqeYwP

It’s always been left to right and now we learn there’s like an entire ether world of egg balancing Hogwartz. It’s weird.

People actually take eggs from the center of the carton so the 18 ounces of weight will be balanced? pic.twitter.com/TxcMpjJfRn

Needless, reckless instability. Might as well put your eggs on a fidget spinner

I legitimately don’t understand the need for “egg carton balance.” It’s not a tennis racket. It’s not a car’s tires. What is going on with you people?

Then there were these people.

The correct way is to use only an even number of eggs each time and resize the carton after. #EggCartonTwitter pic.twitter.com/gbDqPJBrjI

Sounds like today is as good a day as any to share my slight ocd with egg carton management. B = boiled, obviously. 14 of them for the week, 2/day, ending at the center. Unboiled ones guarding the corners. Everyday morning #win #EggCartonTwitter pic.twitter.com/w6w3wpMHya

There’s a heated debate raging on #EggCartonTwitter. Do you remove your eggs from the carton:

In the end, as with all discourse on Twitter, it ended with everything going to shit.

There, Twitter. Now no one has any eggs. Are you happy now? pic.twitter.com/FpW81nAyMs