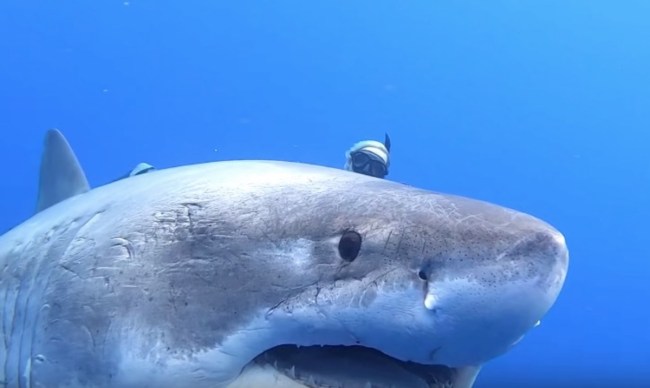 A great white shark spotted off the coast of Hawaii has left diver stunned. The shark is estimated to be 8-feet wide and weigh 5,000-pounds (2.5 tons), it’s also said to be as long as an adult giraffe is tall (~20-feet-long).

What I think is even crazier is the shark’s age, it’s believed that this great white shark is the infamous specimen known as Deep Blue, the largest great white shark ever filmed. And they think this shark is somewhere around FIFTY YEARS OLD. That’s such a crazy amount of time for an apex predator to live.

Also, you’ll notice that this shark looks swollen like an NYC squirrel who’s been fattened up by tourists. Scientists believe Deep Blue could be pregnant and that’s why the shark looks so enormous at this moment.

Why exactly did this diver get close enough to touch the largest great white shark in the world without a protective cage between them? Here’s what they told AlJazeera: “Big pregnant females (sharks) are actually the safest ones to be with – the biggest, oldest ones – because they’ve seen it all, including us,” Ramsey said. “That’s why I kind of call her, like, a grandma shark.”

The shark was spotted off of the Hawaiian island of Oahu while she fed on a dead sperm whale. Scientists believe she could be in the area to hunt on whales while she’s pregnant.

These dead whale carcasses often show up off the coast of California and bring in large numbers of great white sharks looking for an easy meal after they smell blood in the water. The same is happening off of Oahu at the moment but the winds have currently shifted and the dead whale is moving away from shore.

The concern with these situations is always the wind pushing the whale carcass close enough to shore to create a safety concern for swimmers, surfers, and beachgoers. If you’ve got a dead whale a mile offshore and blood in the water there will always be lots of sharks around. This particular whale carcass had attracted so many tiger sharks around Pearl Harbor that it had to be towed offshore by officials where it continued to attract huge numbers of sharks.