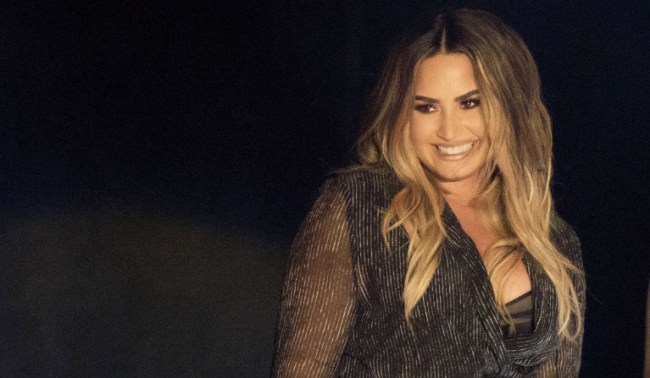 Demi Lovato doesn’t want to keep secrets anymore and isn’t afraid to share the truths of her tumultuous past. The 25-year-old singer revealed some shocking details about her drug abuse despite being a squeaky clean Disney Channel star. Demi unleashed some unbelievable details about her life including drug abuse, casual sex, the dating app she uses, and being admitted to a psychiatric ward in her new YouTube documentary titled Simply Complicated, which you can watch below.

While Lovato was working for the Disney Channel at the age of 17, she first experimented with alcohol, marijuana, and cocaine. “I loved it,” Demi said about coke. “I felt out of control with the coke the first time that I did it.” With addiction in her family, it only increased her desire for drugs. “My dad was an addict and an alcoholic,” Lovato said. “I guess I always searched for what he found in drugs and alcohol because it fulfilled him and he chose that over a family.”

The pop star says she struggled with cocaine abuse and sobriety back in 2010, when she was only 18-years-old. She received inpatient treatment after a two-month bender where she was abusing drugs daily. “I just came to a breaking point; the next 12 months were extremely difficult.” She said. “I wasn’t ready to be sober. I was sneaking cocaine on planes, I was sneaking it in bathrooms, sneaking it throughout the night,” Demi said. “I was using while I had a sober companion, and I went through about 20 different sober companions. I would sneak out and get drugs, I would fake my drug tests with other people’s pee.” Then she almost overdosed on a deadly combination of cocaine and Xanax. “I started to choke a little bit, and my heart started racing. I remember thinking, ‘Oh my God, I might be overdosing right now,'” she says.

Lovato was hospitalized after locking herself in her bedroom and swallowing pills. “The nurse is checking her in. The bottle of pills is there, she grabs the pills, she then downs all the other pills and says, ‘You fucking bitch! If I just tried to kill myself, why would you give me access to pills?'” Lovato’s specialist said. Demi was then admitted to the psychiatric ward. “I didn’t feel anything. I didn’t feel guilty. I didn’t feel embarrassed,” she says.

Lovato recalled her first love, Wilmer Valderrama. “I met him on Jan. 11, 2010. I thought, ‘I have to have him,’ but I was only 17 and he was like, ‘Get away from me,'” she recalled. “When I turned 18 we started dating. I think it was love at first sight. We connected on a level that I’ve never connected with anybody before. He was just my rock, my everything.”

If you want to date Demi, you’ll need to be on the invite-only dating app Raya, but she’s not just looking for dudes. “I am on a dating app with both men and girls. I am open to human connection, so whether that’s through a male or female, it doesn’t matter to me,” Lovato stated. “There is something sexy about someone putting in all of their physical strength into their passion.”

“The last decade has taught me a lifetime of lessons. I’ve learned that secrets make you sick. I’m learning how to be a voice and not a victim. I’ve learned sex is natural. I’ve learned that love is necessary, heartbreak is unavoidable and loneliness is brutal,” Lovato said in the 78-minute documentary. “I’ve learned that the key to being happy is to tell your truth and be OK without all the answers. There’s a certain stigma around women having casual sex and for me, I feel it’s my body, it’s my choice, it’s exciting, it’s a connection with somebody and it’s fun. When I’m comfortable in my own skin, I feel confident,” she teases. “When I feel confident, I feel sexy, and when I feel sexy, watch out!”

You can watch the Simply Complicated documentary below.