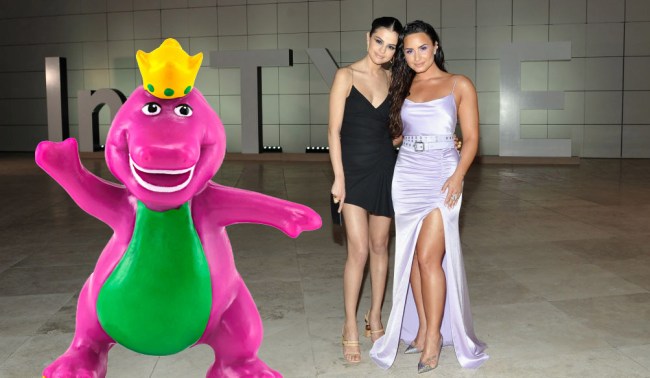 Did you know that at one point in time Demi Lovato and Selena Gomez were on Barney & Friends together? Because I did not. Nor did, apparently, a big chunk of the internet based on some recent tweets.

And they weren’t just on the show together for one episode either. Demi Lovato, who played Angela on the show, appeared in nine episodes of Barney & Friends during seasons 7 and 8 from 2002 to 2004.

Meanwhile, Selena Gomez, who played Gianna on Barney & Friends, was on it for 13 episodes during these same two seasons and appeared alongside Lovato in several of the shows.

These gigs on the kids show was also the first credited acting job for both of these future superstars.

Gomez was more of a Barney OG though as she also acted on two DVDs: Barney: Best Manners – Invitation to Fun and Barney: Read with Me, Dance with Me. (Lovato did appear in Read With Me, but only in archived footage.)

Needless to say, these revelations, unbeknownst to some on the internet, have caused quite a stir.

I was officially the last to know that Demi Lovato and Selena Gomez were on Barney the dinosaur together 😳🤯 pic.twitter.com/s1jNOapXBl

2nd to last. I'm just finding this out as well

What? Just what? Really?

Apparently, the show was shot in the Dallas-area, which as we know from her real estate listing, is just down the road from where Selena Gomez grew up.

As for Lovato, her mom Dianna De La Garza was a former Dallas Cowboys cheerleader and Lovato even has an older sister named Dallas.

What an enlightening day this has been. Thanks, internet!