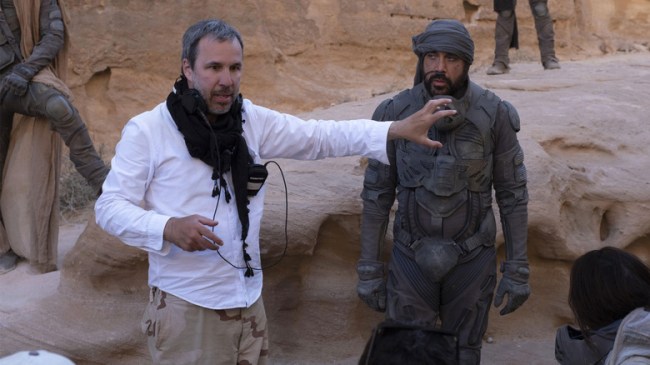 First things first: rest in peace Uncle Phil. Sorry, I can’t resist sometimes. But seriously, first things first: Denis Villeneuve is easily one of my favorite working directors right now if not one of my Top Five favorites of all time. For me, I’ve got Martin Scorsese, Quentin Tarantino, Christopher Nolan, David Fincher, and then perhaps Villeneuve, as his recent filmography is as strong as any. Blade Runner 2049 is my fifth favorite movie of all time, while Prisoners, Enemy, Sicario, and Arrival are all bangers of the highest order. Just want my opinion of Villeneuve to be on the record before we dive in on this.

During a recent interview with El Mundo, Villeneuve — whose massive sci-fi epic Dune is coming out in about a month — said that there are “too many Marvel movies that are nothing more than a ‘cut and paste’ of others,” Villeneuve said.

“Perhaps the problem is that we are in front of too many Marvel movies that are nothing more than a ‘cut and paste’ of others. Perhaps these types of movies have turned us into zombies a bit… But big and expensive movies of great value there are many today. I don’t feel capable of being pessimistic at all.” [El Mundo, via IndieWire]

Villeneuve is half right. From where I sit, Villeneuve’s analysis of the cause is correct — it’s his opinion of the effect that leads him astray. To a certain extent, most Marvel projects *are* the same. While they may vary in genre — WandaVision is a sitcom homage, Falcon and Winter Soldier is a buddy-cop-comedy, Loki is a sci-fi thriller, Shang-Chi a kung-fu movie, etc, etc. — aesthetically, tonally, and structurally, there is an element of uniformity when it comes to the Marvel Cinematic Universe.

Action sequences are often punctuated with one-liners while the third-act climaxes are usually concluded with some sort of CGI blowout (Kang’s electric conversational debut in Loki notwithstanding). The villains are usually unremarkable while the romance, if it exists at all, remains sexless. The MCU has developed a formula and it’s worked — why would they change it? In fact, their ability to replicate quality and therefore success is arguably their greatest strength.

Where Villeneuve is wrong, though, is in his assessment that the audience has been turned into zombies. Audiences engage with the culture and content they enjoy, not because they’ve been brain-washed by the big business of Hollywood. The reason the MCU makes so much money is, simply, because it has a lot of fans. His issue should be with the studios churning them out, not the audiences going to see them. We haven’t become zombies, the studios have become lazy, rebooting and remaking intellectual properties until their very creative life-forces have been eroded away entirely. Dune, for as ambitious as it may be, *is* a remake of a 1984 David Lynch film, which in and of itself was an adaptation of a 1965 novel by Frank Herbert.

Hollywood’s been in the xerox business for decades now, everything’s always been a copy of a copy of a copy. It’s not Marvel’s fault they perfected it, and it’s certainly not the audience’s fault for enjoying it.

Dune, which I’m massively excited for and cannot wait to see, will hit theaters and HBO Max on Friday, October 22.