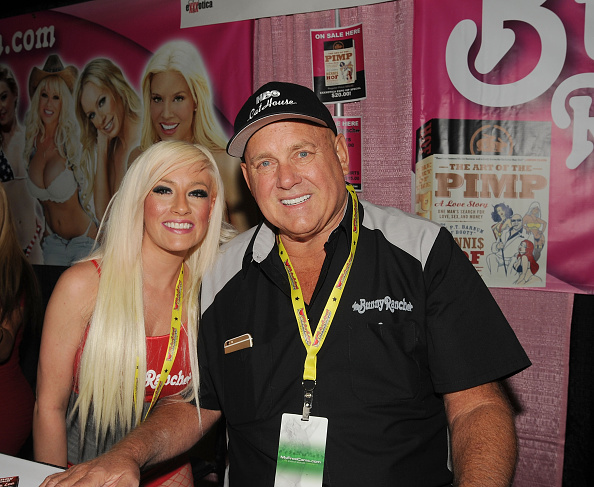 Usually in politics, it’s the dead people who are casting votes and not dead candidates who are receiving them. But not in Nevada. Dennis Hof, the iconic brothel owner, died last month. But that itsy-bitsy impediment didn’t stop his supporters from electing him on Tuesday. Maybe democracy was a mistake?

Here's the polling notice in Pahrump today informing voters that GOP Assembly candidate Dennis Hof is deceased but still appears on the ballot. If Hof wins, county commissions from the 3 counties that the district covers will appoint a replacement from the same party #nvleg pic.twitter.com/p8mjPBIwzz

On Tuesday, Hof buried his Democratic opponent Lesia Romanov in a stiff competition. After losing an election to a dead guy, Lesia Romanov may want to think about a different line of work. Exactly three weeks after his death, the brothel owner won in a landslide, snatching 68.3 percent of the vote. People missed a golden opportunity to make it 69 percent.

Nye County has some numbers, and it looks like Dennis Hof, the brothel owner and Assembly candidate who passed away a few weeks ago, has 68% of the vote pic.twitter.com/qpPdKIU2IQ

So does his corpse get propped up on a desk and quietly serve his term and actually be more beneficial to the citizens than most politicians? Not exactly. Members of the Nevada Republican Party will choose a replacement, preferably one with a pulse, to fill Hof’s State Assembly seat. So the voters will still get a Republican in the 36th Assembly District.

Hof called himself the “Trump from Pahrump,” as a reference to the small town in Nevada where he lived. Hof also ran for office in 2016 as a Libertarian but lost.

Hof was best known for owning the Moonlite Bunny Ranch, which was featured on the HBO reality series Cathouse that ran from 2005 until 2014. Back in October 2015, Lamar Odom was found unconscious at one of his brothels and had cocaine and opiates in his system.

“This came as such a shock. How the heck?” Ron Jeremy said in regards to Dennis Hof's death. “People love the living daylights out of the guy … You don’t think of an American pimp being a teddy bear, but he was”
READ MORE→ https://t.co/ljKdf78IFu pic.twitter.com/7u4rA3ahGF

One could argue that Dennis Hof could be the first politician to not utter even one lie while in office.