65-Year-Old Dennis Quaid Got Engaged To A 26-Year-Old Stunner And, Oh Boy, Did Twitter Have Jokes 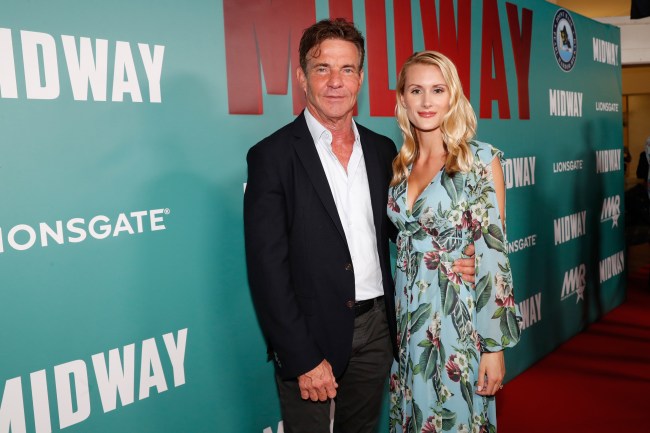 Dennis Quaid has been around the Hollywood scene for the past 40 years, getting a ton of notoriety in the ’80s with movies like The Right Stuff (1983), The Big Easy (1986) and Innerspace (1987), among others. Funny thing is, those films mentioned were all released before Quaid’s newest fiance, 26-year-old Texas Ph.D. student Laura Savoie, was even born. Kind of weird, right?

Look, in a totally acceptable and secure-in-my-manhood manner, Dennis Quaid’s a good looking dude, so the fact that he’s 65 years old and is still capable of pulling a smart and pretty woman like the 26-year-old Laura is understood, I suppose? Still, the fact that my dad’s his age and (hopefully) isn’t eyeing someone nearly 40 years younger than him is a bit extreme, even in Hollywood.

Revealing the news to Extra while being interviewed for an upcoming movie called Midway, Dennis Quaid described the way he proposed — which, hilariously, couldn’t be more fitting since it included taking a selfie with his millennial fiance.

“I had the ring in my pocket… I wanted it to be private,” Quaid said, explaining how the proposal went down. “She was actually taking a selfie of us, and I put the ring in front and said, ‘Will you marry me?’ — and then she fell down.”

True love has no age limits, so I’m not going to shit all over Quaid for landing a serious stunner like Laura Savoie. Oh, but that doesn’t mean people on Twitter won’t, as there were lots of hilarious reactions to the news of the couple’s engagement. Take a look below at some of the most ruthless.

A 39-year-old Dennis Quaid sits outside a hospital’s nursery, he’s approached by a new father, “Which one is yours?”

Dennis points at an adorable newborn, “In 26 years, that one.” https://t.co/cKRcSLNSaX

Congratulations to Dennis Quaid and his fiancee on their engagement. pic.twitter.com/Rzg2VRzVcQ

Fun fact: actress Elaine Hendrix, who played the character considered too young to be Dennis Quaid’s girlfriend in the 1998 film, is now 48 years old and is totally too old for him now. pic.twitter.com/A28N2Xd4FQ

Just a reminder that Dennis Quaid has already played a man who was getting the side eye from his 11 year old daughter about having a 26 year old fiancé IN 1 9 9 8!!!! pic.twitter.com/cjiY7ifjqy

No one supports Millennials more than Dennis Quaid. https://t.co/Hc2dg33B7n

You can’t knock the hustle here by Dennis Quaid, but, let’s call a spade a spade, because it’s kind of creepy to think the 65-year-old actor keeps going younger and younger when it comes to the women he dates (and marries). I’m sure this is true love and it’s going to last, so here’s to the happy couple staying together forever — or at least till Quaid’s AARP membership kicks in. Dennis Quaid is just staying young at heart in every literal form of the expression, so much respect, my brother.