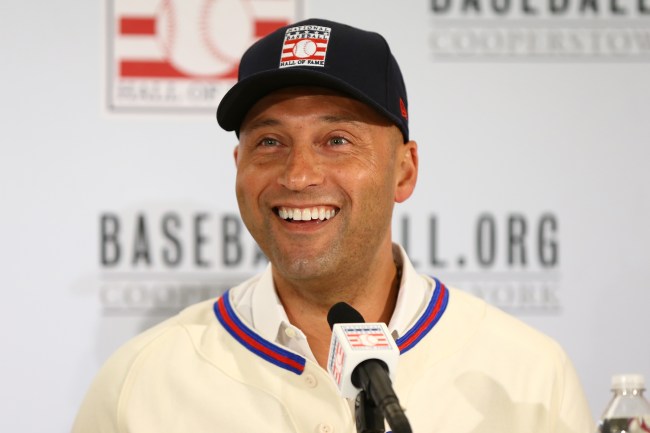 Derek Jeter is selling his $29 million Tampa “house.” There are some delicious, splashy photos of it in this New York Times article. Take a sad little tour and then we’ll get back to thinking about how pathetic our realistic Zillow searches are.

“This is the most impressive home to ever hit the market in the Tampa Bay area,” said Stephen Gay, the Smith & Associates Real Estate agent who has the listing.

It’s also the most expensive and largest-scale property to ever be built on Davis Islands, a residential archipelago located directly south of downtown Tampa. Nicknamed “St. Jetersburg” by locals, the 30,875-square-foot estate was custom-built in 2012 and sits on 1.25 acres overlooking Hillsborough Bay. The seven-bedroom house has eight full bathrooms, eight half-baths, and nearly 9,000 square feet of outdoor space including a series of covered porches and balconies, two boat lifts and an 80-foot-long saltwater lap pool.

Yep, nothing casual about that. Good thing the listing agent clarified that for us. I’m sure a lot of Jeter’s guests walked in and forgot to take their shoes off, mistakenly thinking the place was casual.

https://t.co/wXn3gXM41B#tombrady rental home owned by former New York Yankee Derek Jeter for sale for $29,000,000. The 21,796 Square ft. house has7 bedrooms and 8 baths and annual property taxes of $226,762. It is the most expensive single family home listed in Tampa pic.twitter.com/ClJWQ06n5B

Apparently, Jeets built a six-foot wall around the front, which is two feet higher than zoning ordinances typically permit. The town was willing to grant him this exception given how famous he is. I guess that’s an appealing selling point for whoever comes in next—having two extra feet of wall. Should be perfect for the type of privacy needed by another celebrity or, uhm, a terrorist cell.

For now, it plays home to another handsome athlete—Mr. Thomas Brady, of the Tampa Bay Buccaneers! What fun.

Mr. Jeter recently rented the house to his longtime friend, Tom Brady, who made his debut on Sunday as quarterback for the Tampa Bay Buccaneers. Mr. Brady and his wife, Gisele Bündchen, rented the palatial home from the Jeters knowing that they planned to sell the property.

What do you think Jeter charges him to rent that place? Does he give him a friendly deal and just tell him to cover the utilities/expenses (a casual $226,762 per YEAR in property taxes)? Or does Jeter stick him for what he assumes he could get on AirBnB? I’ll bet it’s friendly.

In any case, if you’re thinking about Tampa, this lovely place is now on the market. Happy hunting!