This Is The Punishment Deshaun Watson Is Reportedly Willing To Accept 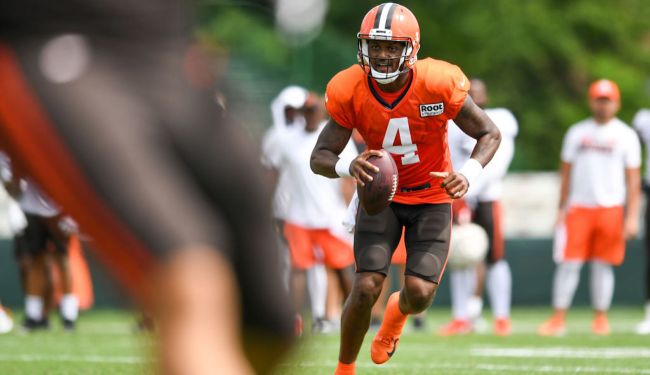 Earlier this summer, it was announced that a judge had decided to suspend Cleveland Browns quarterback Deshaun Watson for six games due to his alleged behavior with various massage therapists. Watson was sued by 24 women for sexual misconduct, with 20 of them eventually deciding to settle out of court. According to a report from the New York Times, Watson allegedly met with 66 different therapists over the course of 17 months.

The NFL, though, isn’t happy with the judge’s decision as they have decided to appeal and will continue to push for a full one-year suspension. With the NFL season just about a month away from kicking off, the clock is ticking for the NFL to appeal Watson’s suspension.

Reports indicate that at the start of the disciplinary process, the league was willing to settle on a 12-game suspension with an $8 million fine, however, Watson declined and now faces the prospect of a year-long suspension.

While the NFL is looking for a one-year suspension, Watson reportedly isn’t open to that idea, as Rob Maaddi of the Associated Press reports that Watson would accept an eight-game suspension and pay a $5 million fine to resolve the situation.

The Cleveland Browns will be kicking off their 2022 preseason schedule tonight when they take on the Jacksonville Jaguars at 7 p.m. Then, on Sunday, September 11, the Browns will kick off their regular season campaign against former quarterback Baker Mayfield and the Carolina Panthers.

RELATED: Cleveland Browns Will Reportedly Consider Trading For One Quarterback If Deshaun Watson’s Suspension Is Extended