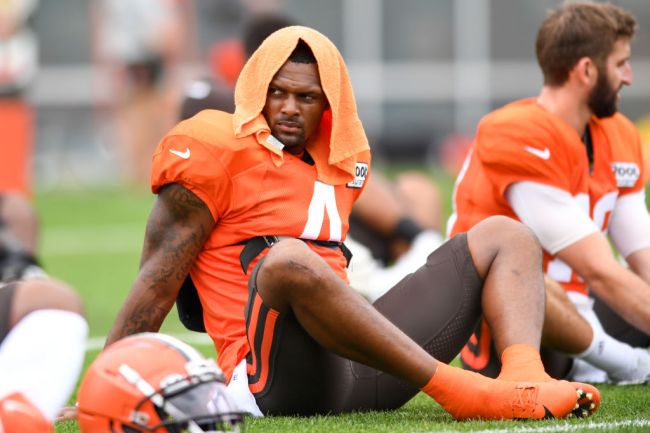 5 months after trading a treasure trove of draft picks for Deshaun Watson and signing him to the largest fully-guaranteed contract in NFL history, the Cleveland Browns still don’t seem to really have any idea how they will handle their quarterback situation during the 2022 season.

They’ve spent most of the summer claiming that Jacoby Brissett would be the team’s starter while Deshaun Watson was suspended, even when the possibility of Watson facing a year-long suspension seemed to very much be on the table.

Watson only ended up getting a 6-game suspension, but the NFL chose to appeal and now there is a very good chance that Watson will be suspended for more than those first 6 games.

As they face that possibility, the Browns seem like they may be changing their mind on who their starter should be in Watson’s absence.

According to cleveland.com’s Mary Kay Cabot, the Browns are going to consider a move for Jimmy Garoppolo if Watson’s suspension is extended.

The Browns will have to hurry up and make a decision on whether or not they need to make a move for a QB as we are quickly approaching the point that any QB they acquire might not be ready for Week 1.

If the Browns make a move for Garoppolo, they’ll at least still have a chance to be a playoff team even without Watson thanks to the strength of their defense and their run game.

The Browns will just need to decide whether or not to pull the trigger soon before anybody else’s quarterback situation changes and somebody makes a move for Garoppolo first. Otherwise, this season could be a real disappointment for the Browns if Watson’s suspension gets extended.