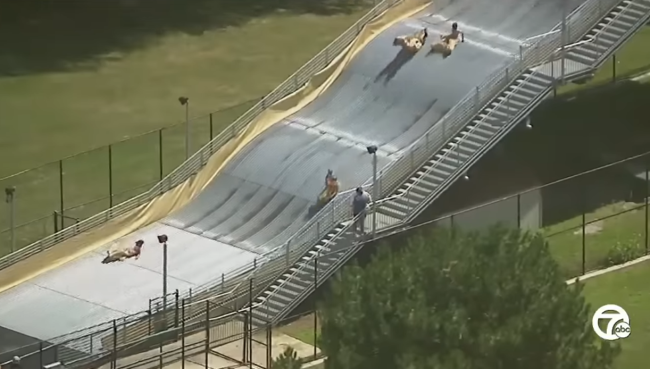 In 2020, HBO Max aired a documentary about Action Park, a now closed amusement and water park that was located in Vernon Township, New Jersey. The place was nicknamed Class Action Park, Accident Park, and Traction Park because of all the dangerous rides and attractions, including the aptly nicknamed “grave pool,” where three of the park’s six deaths occurred.

The “Giant Slide” in Belle Isle Park in Detroit would have fit right in there, yet amazingly, last week, after two years of being closed, reopened to the public.

The slide originally opened back in 1967, then was replaced with a new version in the 1980s, back when, similar to Action Park, there was very little in the way of safety regulations for amusement parks and rides.

Interestingly, the reopened slide is now being run by Michigan’s of Natural Resources along with local amusement company Healthy Kidz Inc.

And it’s still as insane as it has always been.

On Friday, the first day it was reopened to the public, the “Giant Slide” had to be shut down just hours after it opened because of the speeds riders reached while flying down it.

The giant slide at Belle Isle Park in Michigan was open for only 4 hours before workers shut it down to make adjustments.

I wonder why they decided to do such a thing 😳 pic.twitter.com/q7jpFdLdAO

WXYZ News reported “fun turned to fear around noon for his kids as speed became an issue on a massive slide.”

As a result, the Department of Natural Resources “scrubbed down the surface and started to spray a little water on the slide between rides to help control the speed.”

There’s nothing wrong with the Giant Slide on Belle Isle. It’s not broken.
These young kids just don’t know how it’s done. The “older” kids do. 😂 #Detroit pic.twitter.com/iMTY2hyNA3

Kenyatta Mcadney, whose kids went on the slide, told WXYZ News, “If they would have kept riding on that slide, somebody would have got hurt.”

Michigan DNR claimed that somehow there had been no injuries had been reported.

Not that the risk of bodily harm resulting from going down the “Giant Slide” in Belle Isle is anything new.

Former NBA star Jalen Rose remembered how rough the slide was back when he was a kid.

“That’s how it was when I was growing up!” said Rose. “We used to be flying, like weeeee! We thought that was normal. So now I’m glad this goes viral and people see this!”

He said Belle Isle's savage Giant Slide made him who he is today.

"We thought that was normal. So, I'm glad now that it's gone viral & people see this." 😂 pic.twitter.com/YukZ9DSJ5q