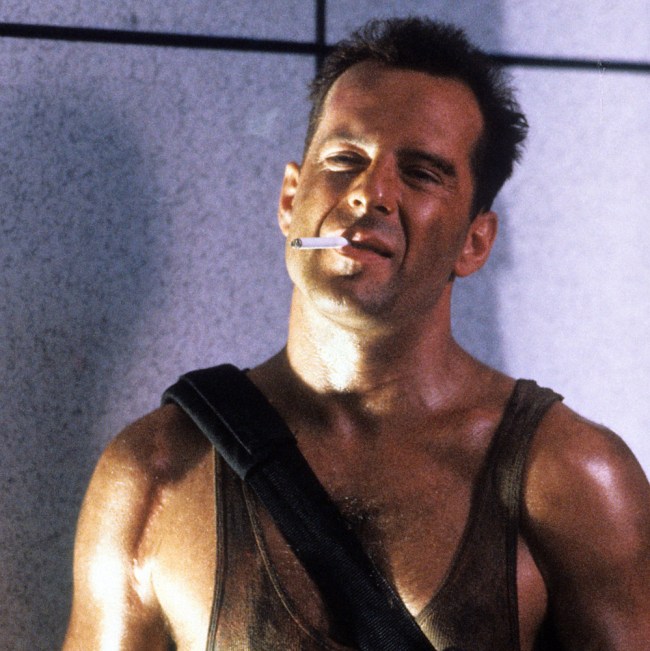 It’s now been 30 years since the greatest Christmas movie of all time (yes, it is, Bruce), Die Hard, blasted its way into theaters and in turn, into our hearts.

And as anyone who has seen the movie, there are a handful of iconic scenes that took place in Die Hard that fans of the film will never forget.

Two of those scenes involved characters in the movie taking plunges from the heights of Nakatomi Plaza: John McClane’s legendary jump from the roof, and Hans Gruber’s memorable fall to his death.

To mark the 30th anniversary of one of the greatest action movies ever, Simon Abrams of Vulture spoke to Die Hard director John McTiernan about those two epic drops.

…that sequence in general, if I remember correctly, the camera goes past Bruce, and he looks down. Which makes it clear to the audience: Hey, we actually filmed this on top of a building. This is not a movie set; we’re all up here on the top of a real building. Then later, when we started playing tricks, the audience doesn’t notice it as much because we already showed them that we’re on a real roof. Special-effects movies are filled with benevolent lies to the audience.

So we did that, and then we cut to some things that we shot on sets. Like when he swings into the building’s window, that was on a soundstage. It looks real because we attached a piece of scenery onto the side of the building, so there’s a backdrop with city lights and that sort of thing. That was a high-ceiling stage, so Bruce could swing back and forth pretty freely. That’s where he swings out and shoots out the window.

McTiernan also explained how for the explosions they used “mortarlike devices” that would take about 5 to 15 minutes to build a fire that would very quickly have to be put out by firemen.

Fire stunts work fine if you’re working in a parking lot, out in the desert, or on the ground somewhere where you don’t have to worry about trees. But we were working around a real building, so that was pretty tricky. Personally, I found that to be very frustrating. It seemed crazy to spend 15 minutes building a real fire to get five seconds of the fire.

As far as Hans Gruber’s fall to his demise, McTiernan used a little trick to get Rickman’s reaction to turn out as perfect as it ended up being.

I demonstrated the scene to Alan first. I got up there and dropped onto some boxes below. It felt instantaneous; I let go and the next thing I heard was a loud noise as I hit the bag. It seemed so fast, I almost had no time to say, “Oh, I’m falling.” It’s just BANG.

We also counted Alan down from one to three, and then dropped him before we got to three. That’s a standard thing when you want to catch the look of surprise on an actor’s face. His facial expression changed in a way that I never could have gotten without him actually falling. There’s just no way he could fake that.

McTiernan also explained how they had to use a computer to control the camera’s focus on Rickman’s eyes because he was falling at about 32 feet per second.

Other topics he covered included how they shot the end of Willis’ jump where he breaks through the window and the fire-hose reel drops behind him, how the film industry changed with regard to stuntwork after a death on The Twilight Zone movie, and how while they were filming the elevator in the building broke about 30 stories up while they were in it resulting in several stuntmen basically setting up a movie stunt involving an adjacent elevator to get them out.

Read all about it over at Vulture.com.