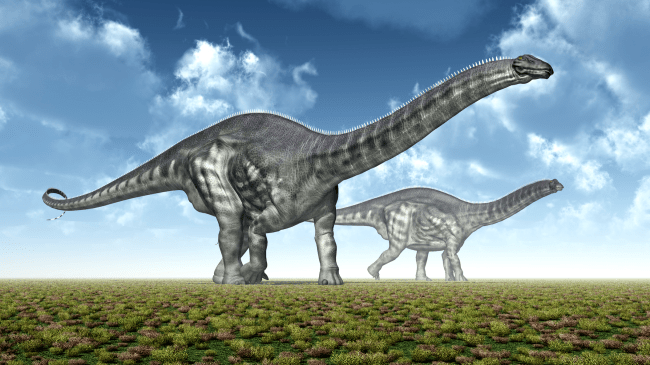 USDA Forest Service workers in Colorado who were recently cleaning up six inches of mud and debris caused by flooding in the Picket Wire Canyonlands made a startling discovery when they uncovered between 100 and 150 dinosaur footprints.

The workers who were using shovels and excavators to clear the area discovered fossilized tracks belonging to the Brontosaurus family of dinosaurs, reports the Colorado Springs Gazette.

“Every track down there is a national treasure,” said John Linn, Comanche National Grassland district ranger. “I hiked it just yesterday actually. … It never ceases to amaze me. I’m always overcome with awe when I stand in those tracks that are 150 million years old.”

According to the USDA Forest Service, the Picket Wire Canyonlands in the Comanche National Grasslands of Colorado are home to the largest dinosaur tracksite in North America. More than 1,900 prints in 130 separate trackways have been discovered there on a quarter mile of bedrock along the banks of the Purgatoire River.

Forest Service drones at a height of 25 feet captured images of dinosaur prints in Purgatoire Valley. They found prints of the Megalosauripus and Parabrontopodus. https://t.co/4U8IuKAi1C #GeographyAwarenessWeek pic.twitter.com/A6skGk3Whk

Related: New Study Tries To Unravel How Birds Survived The Asteroid That Obliterated The Dinosaurs

Normally, when crews clean up debris after a flood in the area they are just uncovering the previously discovered dinosaur footprints for visitors who hike the area or take seasonal Forest Service tours to view.

This time, however, U.S. Forest Service paleontologist Bruce Schumacher said “there was an event that flooded an area that had not yet been mapped and recorded.”

He added that once they discovered one new track it led to more and more footprints that hadn’t been uncovered before.

Schumacher said the newly discovered dinosaur tracks “could continue for a long, long time, but we’ve kind of reached a point where we’ve got a good amount exposed. At least I feel like we’re at a place to continue to manage it as it is.”