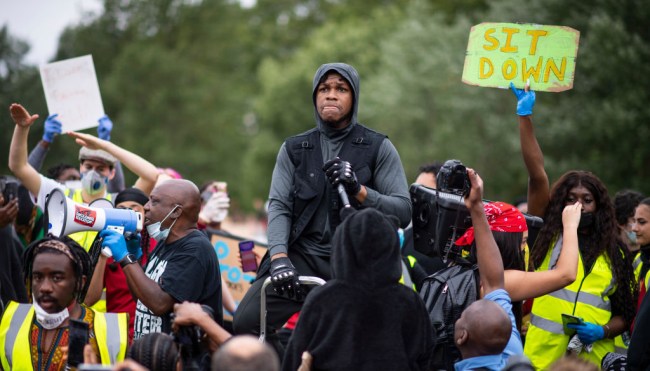 Yesterday, I wrote about John Boyega’s fiery speech at the Black Lives Matter rally, and how the stunning photographs of his soul-bearing face were among the most powerful images I’ve seen in the last week.

These photos of John Boyega are unbelievably powerful. pic.twitter.com/uhrHRsHLSj

During his remarks, Boyega — who achieved international fame after starring as Storm Trooper-turned-Rebel Alliance Freedom Fighter Finn in Star Wars: The Force Awakens, Star Wars: The Last Jedi, and Star Wars: The Rise of Skywalker — said that he didn’t care how his outspokenness may affect his Hollywood career in the future.

Well, turns out Boyega didn’t need to wonder about his acting future for too long, as a bevy of powerful Hollywood directors have since come out to voice their support 28-year-old Englishman.

From Jordan Peele to Edgar Wright, from Phil Lord to Cathy Yan, Hollywood’s creators are making it clear that they’d love to work with Boyega in the future.

Have before and would again, in a heartbeat. So proud of John today. https://t.co/qLi4cwws2i

Be proud to. And lucky. https://t.co/qg4sERvX3U

I would love to work w John Boyega https://t.co/zQTIP29SVR

I would work with John Boyega and I urge other Non-Black creators to affirm that they have his back as well. https://t.co/SqXgmIS5aR

Crazy that it even needs to be said, but of course!

I mean… he’s from Peckham and I’m from Bromley, but even so, I’ve STILL got his back! ❤️ https://t.co/5kXugkFt2u

Well, there ya have it — it looks like Boyega is going to star in Jordan Peele’s next movie and let me promise you this right now: it is going to SLAP. Boyega is a bullet train of charisma while Peele is one of the most exciting young directors working today. It also wouldn’t surprise me if J.J. Abrams — who was obviously influential in Boyega’s casting and recently signed an overall deal with WarnerMedia — tosses his hat into the ring and hires Boyega for a future project.