‘Star Wars’ Actor John Boyega Delivers Unbelievably Powerful Speech At BLM Rally, Says He Doesn’t Give A F*** If It Affects His Career 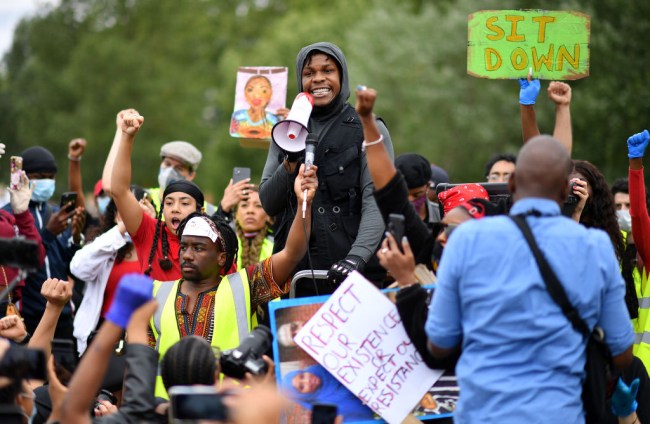 The scenes coming out of the Black Lives Matter rally in London’s Hyde Park are stunning. Well, truth be told, the protests across the entire globe are jaw-dropping. Let’s take a trip around the third rock from the Sun, real quick:

This world is uniting around America. There are #BLM protests in:

And while the scenes around the globe have been equally eye-opening and inspiring, one of the most powerful images I’ve seen in the last week is the pure emotion and, frankly, the soul-shattering pain on the face of Star Wars actor John Boyega — who has appeared as Storm Trooper-turned-Rebel Alliance fighter Finn in The Force Awake, The Last Jedi, and The Rise of Skywalker — as he spoke at the Black Lives Matter rally in London today.

These photos of John Boyega are unbelievably powerful. pic.twitter.com/uhrHRsHLSj

Boyega has been incredibly outspoken from the start, as his Twitter account has been filled with powerful messages of racial equality for the last week straight. But, man, even with all of that considered… these scenes just hit different. I don’t know if it’s possible for the pain, suffering, and injustice of generations upon generations to be reflected in one man’s face and echoed in one man’s voice, but if it can, that’s what happened with John Boyega today.”If you’re not deeply moved by every word last word that rings from his mouth, I feel sorry for you.

Perhaps best of all — in case you needed even further proof that Boyega is the definition of a real one — he reportedly said “look I don’t know if I’m going to have a career after this but, f**k that.” Legend. Black Lives Matter.