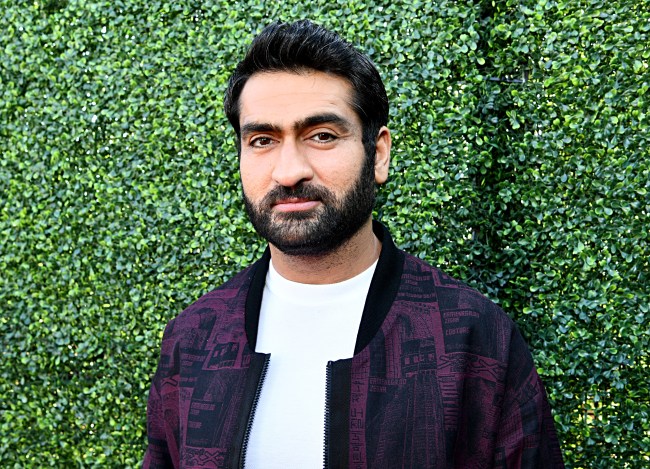 Yesterday I learned that Kumail Nanjiani, the Silicon Valley nerd, could kick my ass with one hand tied behind his chiseled back. This came as great surprise to me seeing as I previously pegged him behind Jim Parsons and Elijah Wood on the list of Hollywood Tough Guys.

Nanjiani, who is in preparation for his role in Marvel’s The Eternals, shared a photo of himself that I won’t be convinced is real until I touch these abs for myself.

Of course, the only reasonable response to Nanjiani’s transformation is: good for him. To turn into a shredded meat popsicle around the holiday season when most of us have lost pigment but gained stomach rolls is no small feat.

I’m so glad everyone has congregated online to praise Kum—oh wait. There had to be one.

Really? This is just so wrong. https://t.co/JQWjUYzbP2

Buckle up, ladies and gentlemen:

OK, so in response to everyone saying he looks like he’s taking care of himself, or he looks healthy, or thinking that I’m a buzz kill or whatever, first of all, I was kidding. But to go on to be that very buzz kill I was just saying I’m not, it’s a long distance 1/

Narrator: But she was not kidding.

Between being healthy and being the obsessive, controlling and all-around obnoxious person you need to be to look like this. A healthy male of his age should have a body fat ranging from somewhere around 8% and 20%. And he is below 8%. That means his metabolism 2/

If you need to be obsessive, controlling and obnoxious to have a sexy body, then give me some binoculars so I can climb a tree and peek into my ex’s window.

Is slowing and he has adopted some pretty unrealistic diet and cardio habits. THIS IS NOT A CRITICISM. AND YES, I’M A FATTY SO WHO AM I TO BE SAYING ALL OF THIS. if you’re curious about my body fat %. I’ll save you the trouble and just let you know it’s roughly 99% 3/

It’s just that this kind of thing really puts pressure on adolescents and others who look to celebrities for their role models. But worse, conflating what Hollywood presents as ideal with health is a grave mistake. Mentally at least, I know I would be far better off 4/

If I’d never seen a picture of Audrey Hepburn but that horse has left the barn. I guess the wrongness of it is just how not Hollywood he seemed. He seemed pretty sweet and honest. And this kind of body takes the sort of effort and determination that is only 5/

worth it if you think you’ve got a big career as a leading man. And that would mean that you are all about going with the leading man program, which is inherently soooooooo not good for most of the rest of us it’s not funny. So it’s disappointing to see that the 6/

If finding out Kumail Nanjiani is in good shape is detrimental to your psyche, maybe you should have slowed up and let the second fastest sperm win the race. I mean seriously.

even a nice guy like this can be sucked into the Hollywood cult of what matters. That’s all I was saying. But this is not “health.” Please don’t mistake this for health if for no other reason than that this body takes a toll on the mental health and well being of its 7/

“Sucked into the Hollywood cult.” This dude is getting paid millions to pretend that he’s a super hero and look like a sex symbol doing it. I just asked for a credit increase to pay for my office White Elephant. Kumail’s the real loser, huh!

Occupant and the mental health and well being of us all when it is promoted as a standard to which we should all aspire. That’s all.