Disney’s Splash Mountain Ride Is The Latest To Be Outed As A Racist, Thousands Petition For A Re-Theme 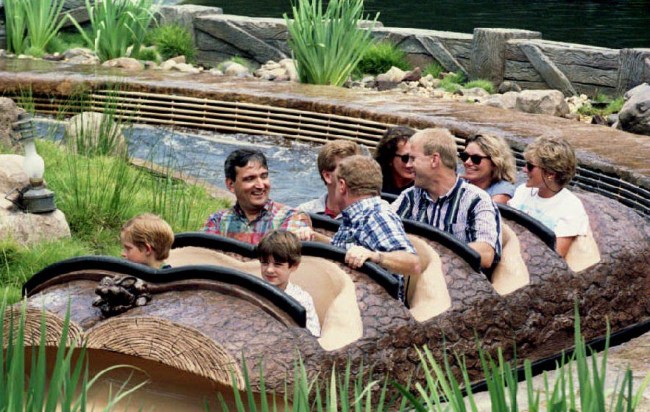 Today I learned that Splash Mountain, the classic log flume ride at Disneyland, Disney World, and and Tokyo Disneyland, is an unforgivable racist.

Petitions are popping up calling for Disney to re-theme the 30-year-old ride for boasting extremely problematic and stereotypical racist tropes from the 1946 film Song of the South, long criticized for its nostalgic views of the post-Civil War South.

Splash Mountain stars Brer Rabbit and Brer Fox, along with all the ducks & chickens & frogs who share their Southern home, and culminates in a tall drop that sends riders straight through the thorny briar. But the animated characters that appear throughout originated in the 1946 film, “Song of the South,” best known for the song “Zip-a-dee-doo-dah.”

The film has long been criticized for its romanticized view of the post-Civil War South. The Guardian’s Scott Tobias wrote in 2019 that the “world and themes of both [the live-action portion and animated segments starring Brer Rabbit] reinforce a nostalgia for a plantation in the Reconstruction era.”

Brer Rabbit’s history is controversial, too.

According to Encyclopedia Britannica, he was a figure in African folklore that traveled with slaves to the US. Then, in the mid-19th century, author Joel Chandler Harris took the character and popularized it in stories that adopted the dialect he picked up from slaves.

Harris’ stories were narrated by an old black man named Uncle Remus, who regales the son of a plantation owner with stories about Brer Rabbit and his animal companions. Those stories formed the basis for “Song of the South.”

The re-theme that is picking up steam on the internet is a Princess and the Frog pivot, the first Disney film to introduce a black princess. This 2009 film was criticized by African-American media outlets for the “choice to have the black heroine’s love interest be a non-black prince, and the use of a black male voodoo witchdoctor as the film’s villain.”

In Disney's Princess and the frog, the wallpaper where Dr. Facilier's shadow is, turned to cross bones. pic.twitter.com/Zs8Bgw7ITi

as much as i LOVE princess and the frog i can’t help but be alittle annoyed at how they villainized hoodoo, voodoo, and tarot….. i know they needed a villain but uh…..y’all know….. pic.twitter.com/LWodh4obnl

At the time of this writing, the petition to re-brand to Frog Splash Mountain has garnered over 10,000 signatures.

Princess and the Frog Splash Mountain retheme for Disneyland thread. Just put on the soundtrack and a splash ridethrough while reading this. pic.twitter.com/8z5wOalyB7

Disney don’t be shy, turn splash mountain into a princess and the frog ride 🤲🏼

It’s only a matter of time before someone digs up problematic Splash Mountain tweets from 2012.