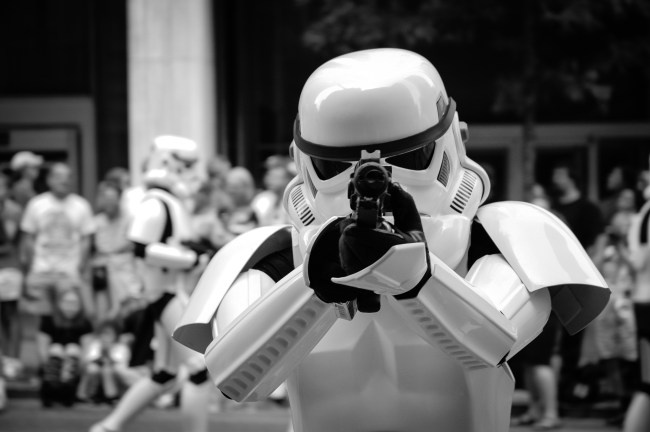 Disney Springs, the shopping area located on Disney grounds in Florida, has come up with a unique way to encourage patrons to social distance and wear masks.

They’re not using the Force, but they’re enforcing and reminding guests of the rules thanks to stormtroopers patrolling the grounds.

A video taken by Attractions Magazine at Disney World‘s shopping district Disney Springs in Orlando shows a pair of First Order Stormtroopers playfully enforcing pandemic protection measures such as wearing masks and keeping an appropriate distance from others.

The apparently prerecorded dialogue is played as two stormtroopers perform on a balcony for the benefit of guests passing by below.

The stormtroopers also walk the grounds and give out warnings such as “Stay in your sector!” if people get too close.

The troopers also joke with one another about patrons wearing masks.

“Hey, you! With the face-covering!” one trooper yells down to the passing crowd.
“They all have face coverings,” the other trooper retorts.
“Well, we made them all look,” says the first.
“And now they all know who’s in charge.”

Disney Springs reopened on May 20, and all visitors must wear masks and get a temperature check prior to entering the park.

The main Disney World park closed on March 15. It’s not scheduled to reopen until mid-July.

The company has announced its new park safety protocols will include limiting the number of visitors, mandatory masks, and “highly energetic” squads of workers roaming the park to enforce social distancing rules.

Disney has reopened other parks around the world but warned that a visit could lead to sickness or death.

There’s also a possibility the NBA could finish the 2019-2020 season in Orlando, but nothing definitive has been announced.