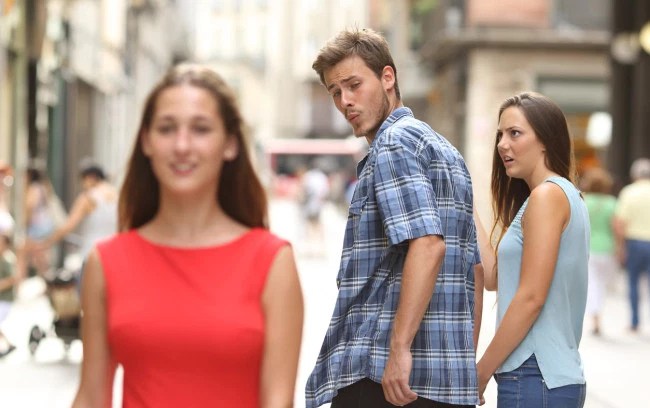 The Distracted Boyfriend Meme couple just will not go away.

First, there was the Distracted Boyfriend Meme Halloween costume.

Then some mad genius wrote a backstory for the Distracted Boyfriend Meme couple and it was absolutely riveting.

Later we learned that the girl in the Distracted Boyfriend Meme is also very SHOCKED by computer screens, and that she too is easily distracted.

And in September of last year, 2017’s Meme of the Year was banned by a Swedish advertising watchdog.

Now, in 2019, they’rrrrre back! This time on a propaganda billboard produced by the Hungarian government trying to get people in Hungary to have more babies. Because nothing says hot sex like these two kids.

The happy couple gracing the Hungarian government’s campaign advertising its new family policy is already famous on the internet…and not for being madly in love. pic.twitter.com/wBljm6eiF7

Anti-Juncker billboards are being replaced with advertisements of the Hungarian government’s "family protection action plan”.

But this new campaign seems to be designed by some less Internet-savvy people. OMG.

Man, they should know better than to use that couple. No way that guy won’t be too distracted to be a good father.

The billboards are also very anti-immigration, reports The Daily Dot.

Hungary is passing legislation to incentivize people to start having more babies. For instance, they have suspended income tax for women with four or more children. Now obviously, there are immigrants who would love come to Hungary but Orbán wants Hungarian children who look like goddamn Hungarians thank you very much.

“In all of Europe there are fewer and fewer children, and the answer of the west to this is migration,” said Orbán in his annual state of the nation address according to the Guardian. “They want as many migrants to enter as there are missing kids, so that the numbers will add up. We Hungarians have a different way of thinking. Instead of just numbers, we want Hungarian children. Migration for us is surrender.”

Needless to say, because, internet, the billboard is getting rightfully roasted.

I see what you did there… and I raise it pic.twitter.com/eHYjCjNqdc

I am still laughing. Govt of #Hungary uses the distracted boyfriend-meme for its latest ‘Make more babies and we will pay you’ campaign pic.twitter.com/H7TOkj31SD

Hungarian billboard advertising the government's family support program features couple from the Distracted Boyfriend Meme. So they must have made up sometime in between. pic.twitter.com/5vQ4eNPq4b