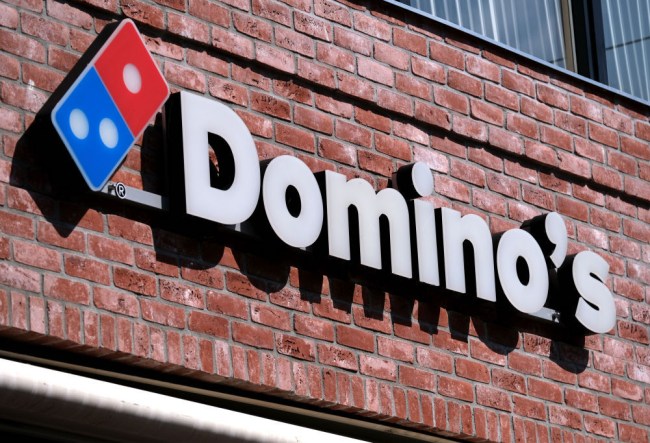 There are plenty of differences between New York and Los Angeles, but despite what people who are seemingly obligated to write essays about why they left the former for the latter may lead you to believe, the lifestyles generally associated with each locale aren’t that radically dissimilar at their core.

Both cities have incredibly vibrant food scenes, and if you ask someone where to eat in L.A., they’ll usually respond by insisting on giving you directions that cut four minutes off what would’ve been an hour-long drive if you’d relied on your GPS to navigate the three-and-a-half mile journey to the dope taco spot hey recommended. If you’re in NYC, you’ll likely be told the seven different ways you could theoretically use the subway (along with the exact number of paces to walk down the platform to optimize any transfers) to travel the same time and distance so you can try what they swear is the best slice in the city.

In regard to both quantity and quality, New York is almost indisputably the Pizza Capital of the World, and during my time living here, I’ve developed some fairly strong opinions—including one particularly Spicy Take that never fails to rile up people who view it as almost sacrilegious: there’s nothing wrong with Domino’s.

Look, I like a pizza made with San Marzano tomatoes flown in from Italy overnight topped with mozzarella made from the milk of a cow that spends its days grazing on a rooftop pasture in Queens and drizzled with oil pressed from olives that underwent a gynecological exam to verify their version status. However, none of the restaurants that serve them can also deliver Cheesy Bread and a lava cake to my door at 2 AM on a Thursday, which is an itch only Domino’s can scratch.

I won’t reveal how often I reap the benefits of the chain’s rewards program because I’m probably already being judged enough but I’m a sucker for free pizza, which is what some people in Australia and New Zealand were recently offered in the form of a new promotion.

According to Business Insider, a promotion was introduced in both countries earlier this week targeted at people named Karen, most of whom probably aren’t thrilled with their parents for going with that moniker after seeing it become associated with every shitty woman who does a shitty thing.

As a result, Domino’s decided to help provide some comfort in these trying times by giving “mask wearing, law aiding Karens” the chance to enter to win a free pizza because, hey, it’s the little things in life that keep you going. 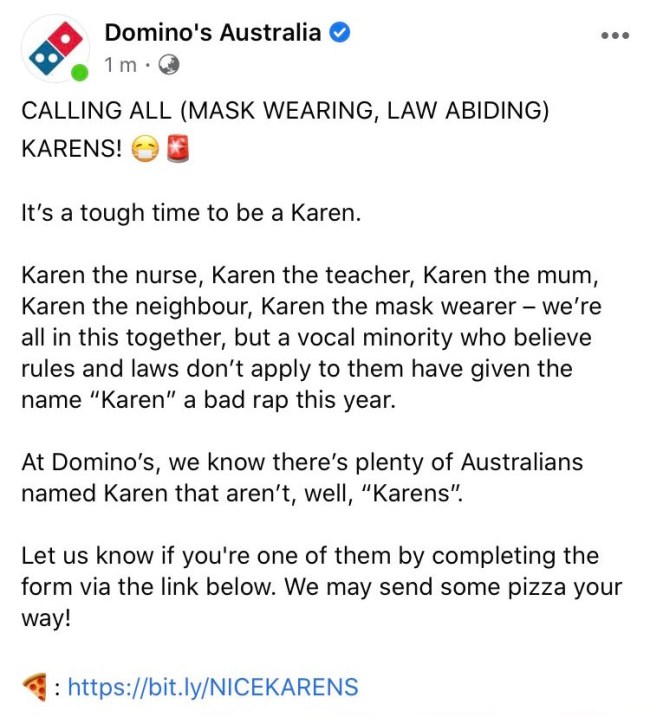 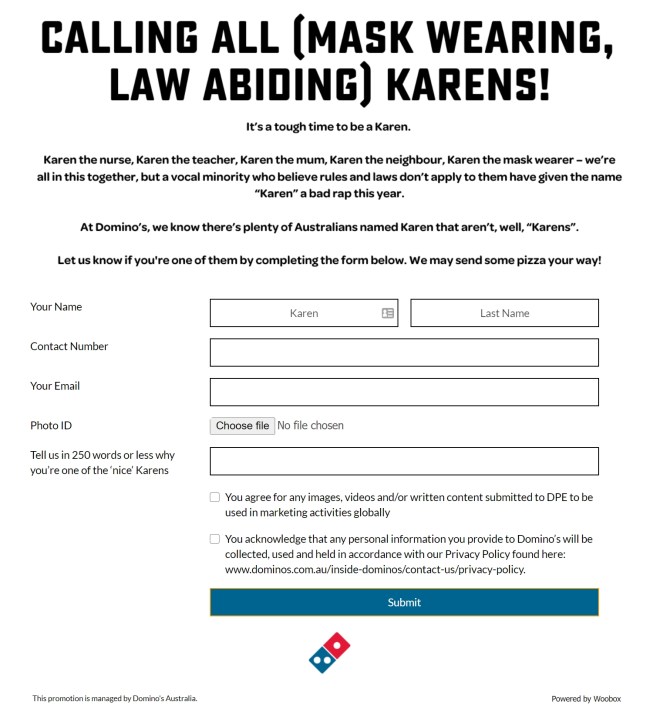 It seemed like a fun and harmless gesture but it didn’t take long for things to go south after Domino’s started taking heat online from people who shamed them for catering to privileged white women by providing them with charity instead of people who could actually use it.

I sincerely mean it when I ask you to correct me if I’m wrong here because I cannot fathom the logic that’s on display. This promotion was a response to “Karen” becoming the de facto label used to describe entitled women with a serious “I Want To Talk To A Manager” vibe. Sure, certain traits may have been associated with the name before it went into Unstoppable Meme Mode but the name someone has tells you literally nothing about their personality. It’s brought me great enjoyment, but there’s no denying this is the textbook definition of a stereotype.

Here’s an excerpt from one of the tweets from a person who took issue with this: “Most of the time Karens are entitled, privileged white women.” Now that is fucking problematic. Wait—do these critics think that the Karens that go viral are all actually named Karen?????? Are they under the impression that when your parents give you that name, you’re just destined to become a mom who pounds half of a bottle of moscato before picking up your child at the dance studio you’re banned from entering because you called the teacher a “bitch” in front of the kids too many times? That’s…that’s not how names work. If that was the case, I’d just call my kid “Archibald” and move to the country estate I assume he’d get as the newest member of the English gentry.

In the end, stores in New Zealand opted to cancel the promotion, but luckily, the universally privileged and entitled Karens of Australia can still take advantage and potentially get some pizza they can dangle in front of a starving child before eating it while laughing maniacally like the terrible people they all are.