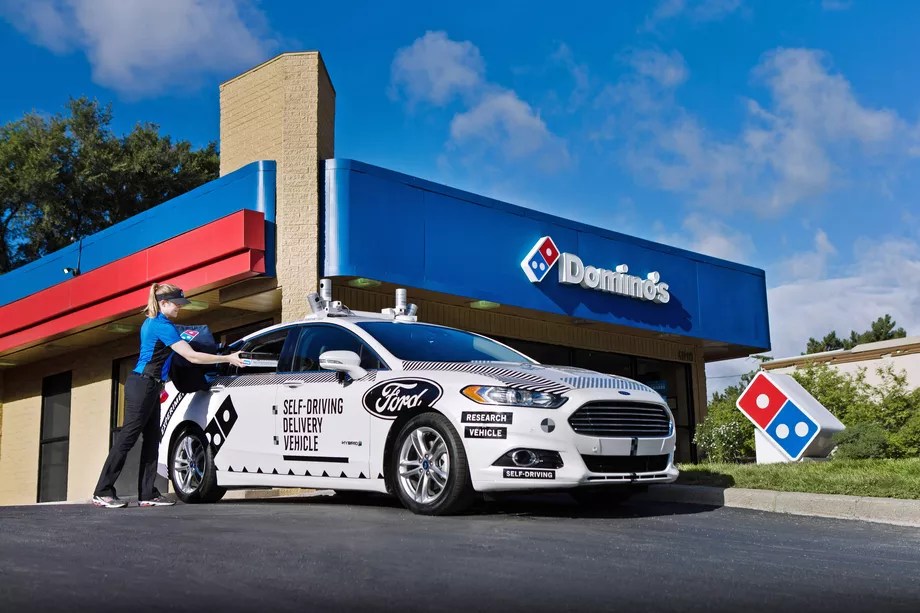 Domino’s might not make the best pizza in the world, but when you’re a little too drunk or stoned, there aren’t many things better than wolfing down an entire pie in a single sitting. However, there aren’t many things worse than having to interact with the delivery guy when you’re in an altered state of mind— which I assume a sizeable percentage of people who get Domino’s are when they place their order.

Thankfully, the company is taking steps to ensure you no longer have to scramble to hide your weed and frantically Febreeze in a paranoiac attempt to conceal your illicit activities from someone who probably couldn’t care less. The Verge reports Domino’s is teaming up with Ford to test a fleet of autonomous vehicles in the hopes of eliminating awkward interactions once and for all (and, in all likelihood, saving themselves money in the process).

However, the cars— which will hit the road in Ann Arbor, Michigan in the coming weeks— won’t be without occupants. Each Ford Fusion will contain safety officer and researchers who will focus on refining the final 50 feet of the customer’s interaction with the vehicle. People who order will be prompted to enter the last four digits of their phone number on a screen outside the car before retrieving their food from a compartment designed to keep it warm over the course of the journey.

There are a couple of ways to look at this. On the plus side, introverts will finally be able to place an order through the app or online and pick up their pizza without having to interact with a single person. Unfortunately, the lack of a delivery driver means you actually have to do things like “put on shoes” and “walk more than ten feet,” which kind of defeats the purpose of getting delivery in the first place. Is this the future of food? Only time will tell.