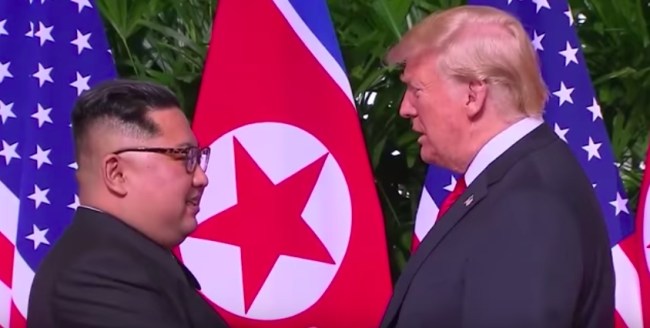 President Trump and North Korean leader Kim Jong Un held a historic summit in Singapore, where the two leaders signed a statement that said Jong Un “reaffirmed his firm and unwavering commitment to complete denuclearization of the Korean Peninsula.”

While more than a quarter of Americans believe Trump deserves the Nobel Peace Prize for tamping down the possibility of nuclear war, Trump drew some criticism after he praised the North Korean leader who has helmed a government that has produced egregious human rights violations.

The extent of Kim’s English skills are not known, though the North Korean leader greeted Trump by saying “Nice to meet you, Mr. President.” State Department interpreter Yun Hyang Lee was on hand to translate the interaction between the two. But who needs an interpreter when the dudes from Bad Lip Reading will do it for you. Enjoy!