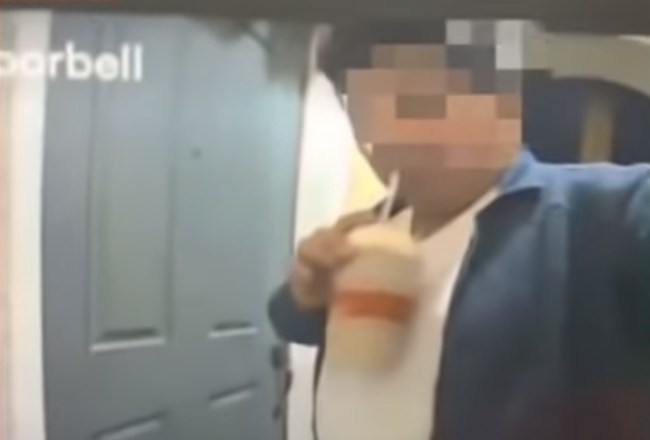 Are you eating a meal that was delivered by an on-demand food delivery service right now? You might want to check your front door security cameras before you finish your meal because your delivery driver may have contaminated your food. That was the case when this teen ordered a milkshake and the DoorDash driver was caught on video sipping the treat.

Rishab Malhotra ordered a Cold Stone milkshake through the DoorDash app. Did you know that you could order one single milkshake for delivery? The 14-year-old enjoyed his ice cream shake until the next day. That’s when he found out that the DoorDash deliveryman took a big ole sip of his milkshake. What kind of milkshake is that — Oreos cooties and cream?

“My dad told me to check out the video from last night, and once I checked it out I brushed five, six times,” Rishab said. “I felt really disgusted.” You have to appreciate the father building the drama of the disgusting act by having his son see first hand that he swapped spit with a delivery guy.

The security camera video showed that the delivery driver drinking the milkshake while he was on their doorstep. “[I thought] ‘Whoa, that’s crazy,” Rashab’s dad Rajesh Malhotra said. “I mean, how can someone jeopardize the product like that, especially the food?” That’s what the dude did on the front doorstep, imagine what he did on the drive over?

If we’re being honest, this gentleman appears that he’s sipping everyone’s milkshake.

Fast food joints don’t put the straw in the milkshake or any drink for that matter, it’s always separate. That might have been a great reason to not accept the nasty milkshake tainted by deliveryman’s saliva.

The Malhotra’s said they contacted DoorDash about the incident several times in the past two weeks, but had not heard back from the food delivery company. “They just need proper training and we want an apology for them to say what we did was wrong and to make sure it doesn’t happen to other people,” Rajesh said.

A DoorDash spokesperson said that the company reached out to the family immediately and have already fired the driver seen in the video. “We sincerely regret that this incident fell short of the experience we strive to give our customers every day,” the statement said. “We reached out to this customer immediately after being notified of this event three weeks ago. We have since taken appropriate actions, including deactivating the Dasher from our platform for failing to follow and maintain our standards of food safety.”