High Schooler With Down Syndrome Drills A No-Look Half Court Shot At Halftime, Crowd Goes Bananas 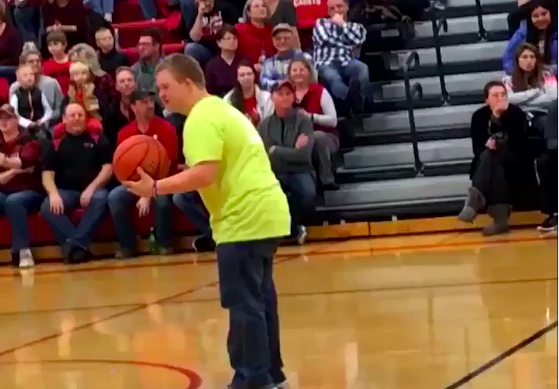 So today on the internet I learned that another batch of Hollywood douchbags have been accused of sexual misconduct, Kylie Jenner is procreating, and I owe $1,500 in state and federal taxes!

Exactly zero of those things make my life better, in any way. Then I found this diamond in the rough.

James Meiergerd is an 18-year-old senior at West Point-Beemer High School in West Point, Nebraska. This week, James, who has Downs syndrome, experienced one of the biggest thrills of his life.

During half-time at a game between his school’s team and their rivals from Wisner-Pilger High School, Meiergerd drilled a half-court shot granny-style, facing away from the hoop. Suffice it to say, the crowd went bananas.

According to ABC News, James was an honorary member of his school’s team and had been practicing with them for two weeks. He also wrestles and participates in the Special Olympics.

The best part of the story: Jame’s heave caught the attention of the Harlem Globetrotters, who invited him to be their guest when they play in Omaha this April.

Now if you’ll excuse me, I’m going to be knocked down a peg while reading Daily Mail stories.