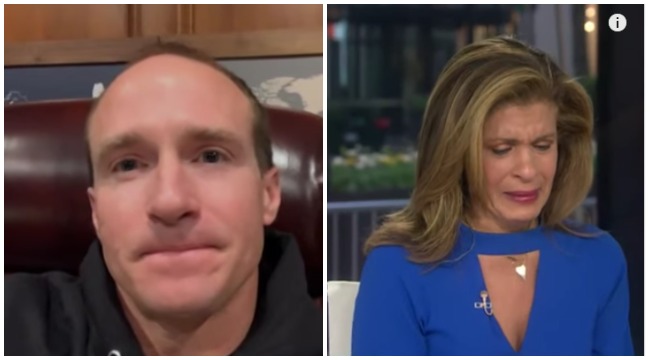 As many of families across America struggle with the indefinite financial strain the global pandemic has thrust upon them, donations from the sports world have poured in.

Zion Williamson vowed to cover the salaries for all of those Smoothie King Center workers for the next 30 days. J.J. Watt donated $350,000 to an Ohio foodbank. Roger Federer donated $1 million for ‘the most vulnerable families in Switzerland.’

And then there’s Drew Brees.

The Saints quarterback announced this week that he and his wife would be committing $5 million to the State of Louisiana for relief efforts to fight against the COVID-19 pandemic. Five million dollars.

Brees appeared on The Today Show to talk to New Orleans resident Hoda Kotb about his insane generosity.

You can watch the full six-minute piece at the bottom of this article, or watch how Brees’ kind act affected the Today Show host in real time.

We love you, Hoda. ❤️ pic.twitter.com/rocZr8J4EE

It’s only a matter of time before Brees throws his hat in the ring for President of the United States, or at the very least, mayor of New Orleans.

Brees’ donation will be allocated as follows:

After “considerable research and conversations with local organizers,” Brees notes that this money will “be mobilizing our partnerships with Second Harvest Food Bank, Ochsner Health Systems, Walk-Ons, Jimmy Johns, Smalls Sliders and Waitr to prepare and deliver over 10,000 meals per day throughout Louisiana.” [via]

It’s impossible to not respect this guy.