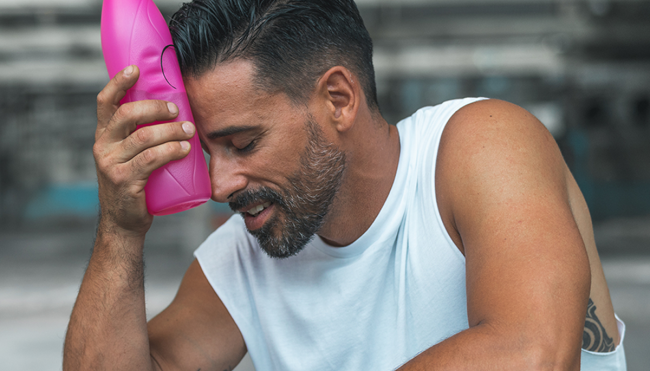 Back when “exercising in the vicinity of other people” was a thing a lot of us used to do on a regular basis, you never knew what you were going to encounter when you headed to the gym for a workout. However, there was a very good chance you’d run into at least one of the many kinds of Gym Guys out there.

There was nothing I dreaded more than walking into the locker room and encountering the retiree who insisted on capping off his session on the elliptical by using the community blowdryer to air out his nether regions. Thankfully, most Gym Guys are fairly harmless and can actually provide a fair amount of amusement.

That includes those dudes who claim ownership of six machines at a time who prowl the floor while downing the neon pink creatine mixture they whipped up in a gallon jug that never contains more than 24 ounces. It’s easy to laugh them off, but it turns out they may have inadvertently stumbled upon the simplest workout hack you’ll ever encounter.

According to Gizmodo, researchers in England recently released the results of a study highlighting the potential benefits of the One Simple Trick that could take your exercise game to the next level: drinking something pink.

While the sample size is admittedly small, the study revolved around 10 people who were first versed in the art of “carb-rinsing,” which involves swishing around a sweetened drink like Gatorade in your mouth before spitting it out to trick your stupid brain into thinking you swallowed it.

Once they were familiarized, the subjects were tasked with comparing the benefits of what they were told were two different sugary offerings. However, the drinks were actually both flavored with artificial sweeteners and were entirely identical aside from the pink coloring that was added to the otherwise clear concoction.

After trying both options on two separate occasions, each participant was tasked with hitting the treadmill for 30 minutes. Based on the data, the team behind the experiment said the people who carb-rinsed with the pink drink not only saw their overall performance boosted by 4.4% but said they enjoyed the workout more than they had after consuming the other variety.

It’s unclear if this placebo effect extends to other colors, and while I consider myself a Cool Blue loyalist, I might have to switch to Strawberry and see what happens.